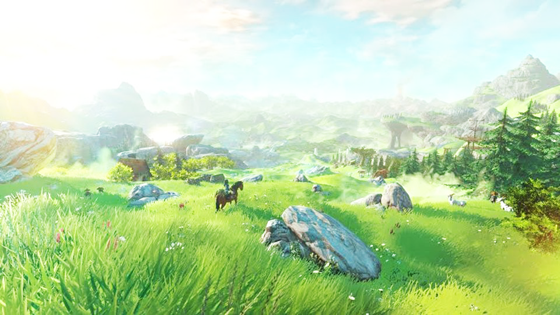 I’ve been wanting a Wii U for a bit. Despite not selling particularly well, it’s amassed quite a sexy repertoire of first-party games. As seemingly all Nintendo systems as wont to do. Now it appears that I finally have a deadline for when I must acquire one by. Sort of. Nebulously. 2015. Why then? It’s when the new Zelda will be dropping.

Nintendo’s next entry in The Legend of Zelda franchise will allow players to explore “the new world of Zelda,” a vast land with few boundaries when it arrives in 2015, Eiji Aonuma announced today during a Nintendo Direct presentation.

The game, which has yet to have its full title revealed, is the first entry from the franchise to launch for Wii U. Speaking about past titles, Aonuma explained that previous games were designed with small, confined areas. Putting these parts together helped create a large world, he said, but players still couldn’t “cut through the boundaries” to truly explore.

“As far as what you can do with such a vast field to explore, as soon as those boundaries are removed, it means you can enter any area from any direction,” Aonuma said. “So the puzzle solving in this game begins the moment the player starts to think about where they want to go, how they want to get there, and what they will do when they arrive. This is a clean break from the conventions of past games in the Zelda series, where you had to follow a set path and play through the scenario in the right order.”

Players will be able to explore “any area they can see from virtually any direction.” The move to a boundary-free world will help create gameplay not experienced in previous titles, the designer added. However, players will still have to look out for powerful monsters as they travel.

“As you know from the Zelda series, the world in these games can be quite peaceful,” Aonuma said. “However, it is a Zelda game after all so strong enemies will certainly appear, even in this setting. Powerful enemies appearing in such a peaceful world is one of the defining features of the Zelda series.” [Polygon]