Archives
« E3 2014: ‘BLOODBORNE’ Reveal Trailer: The Darkest of Next-Gen Souls
Sigourney Weaver all up in ‘AVATAR’ sequels. As a new character. » 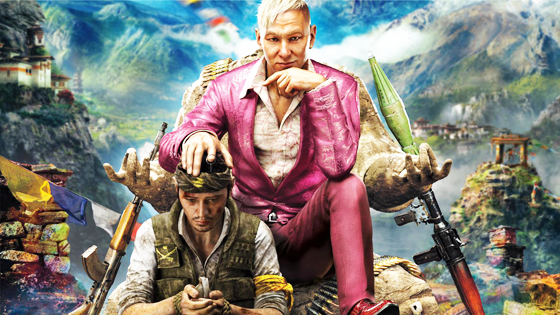 Far Cry 4 came on the screen during Sony’s E3 presser and promptly dominated my balls. However, Sony dropped a fucking bomb just as I was imploring a friend to buy the game so we could play together. If you want a friend to join in your epic mountainous battle with elephants and locales and shit, your friend doesn’t need to own the game. Wut.

Those who purchase Far Cry 4 will be able to share and play the game with a friend who has not purchased the new release, it was confirmed by Sony today.

Alongside this news, Sony announced the new Far Cry title will feature two-player co-op, as shown in the latest trailer showing in-game footage of the upcoming release.

The footage was shown during Sony’s E3 conference today, and offers a look at one player scaling and grappling a mountain, making use of grenades and a cross bow, and using a wing suit, as well as interaction with an additional player in co-op. The second player joins you by transporting you in a minicopter, as per the trailer.

Far Cry 4 is scheduled to release on Nov. 18. More details can be found here. [Polygon]