Archives
« E3 2014: ‘Tomb Raider’ getting sequel, ‘RISE OF THE TOMB RAIDER’, dropping in 2015
‘GUARDIANS OF THE GALAXY’ poster features The Rocket and the Tree » 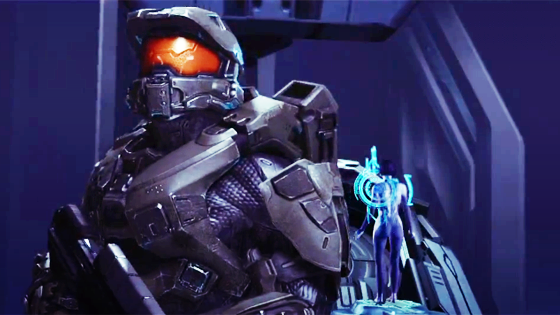 It’s a SURPRISE! That we knew about last month. Microsoft is releasing Halo: The Master Chief collection this November, giving fans of John-1117-SpartanGuy something to chew on until Halo 5: Guardians of A Different Galaxy. Plus! It features the buzz words of Gen8 or whatever: 1080p, 60 fps.

Halo 5 might not be coming to the Xbox One until 2015, but that doesn’t mean there won’t be anyHalo on Microsoft’s latest console this year. The company announced today that Halo: The Master Chief Collection will contain remastered versions of the first four numbered Halo games and all their DLC on one disc this holiday season.

Each game has gotten a makeover for the Xbox One, of course, to run at 1080p and 60 frames per second. As in 2011’s Xbox 360 remake Halo: Combat Evolved Anniversary, the new Master Chief Collection will let players jump between the original graphics and the new, Xbox One-powered engine on the fly to see how things have changed, with even less transitional delay this time around. The jump from the standard-definition original Xbox titles to a full 1080p presentation in the new collection was especially striking in an early demo. In addition, the soundtracks for the first two Halo games will be replaced with completely new orchestrations for The Master Chief Collection.

Every mission and difficulty level in Master Chief Collection will be unlocked from the start. A new user interface will let players jump between these missions quickly or choose from curated playlists or specific mission types, like every warthog mission, for instance. Players may be able to create their own playlists in the future, but that will not be a feature at launch, the developers said.

Purchasing Master Chief Collection will grant players access to the Halo 5: Champions multiplayer beta, set for release in December. The game will also contain full access to Halo: Nightfall, an original video series created in collaboration with Alien director Ridley Scott. New episodes of that series will be available weekly, and it will be “longer than a feature film” when taken together. This effort is separate from the Steven Spielberg-helmed Halo TV show, which is still set to launch in the fall of 2015.