Here’s a poster for Nolan’s ‘INTERSTELLAR’, plus trailer news 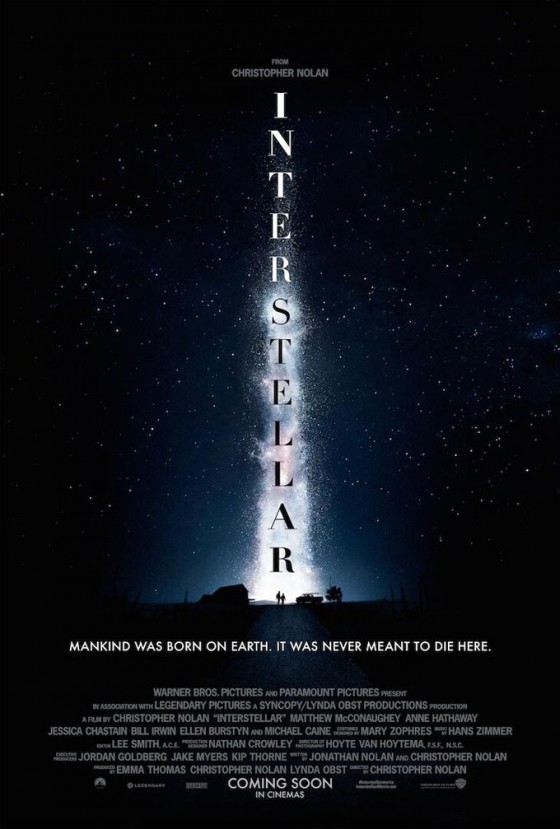 I have no fucking idea what to make of Interstellar. The original teaser gave nothing, purported plot leaks have something to do with a fucking corn crisis, and it stars my hero Rustin Cohle. So I’m excited, confused, moderately aroused. Business as usual. Here’s the first poster for the flick though, and some information about the upcoming trailer.

There’s a couple of reasons to go see “Godzilla” next weekend. Firstly, it looks awesome, secondly, the new trailer for Christopher Nolan‘s “Interstellar” will be unveiled for everyone to see. However, if you live in Washington, D.C. you can see it right now.

The Washington Post reveals that the Lockheed Martin IMAX Theater is now showing the new trailer in front of screenings of “Hubble 3D.” Oh, you want to know what you’re in for when you get to see it for yourself? Well, here’s a little description:

After a brief announcement, the trailer unspooled to show Matthew McConaughey driving his truck through corn fields while a lush orchestral score swelled in the background. Later, the fields had caught fire, an ominous dust cloud could be seen looming over a baseball game, and McConaughey (playing a character named Cooper) was reassuring his daughter that he loved her — right before being shot into space in order to save the world.

Indeed, as the latest poster’s tagline declares: “Mankind was born on earth. It was never meant to die here.” Promising stuff indeed, with plot details about the movie still being kept under guard though it may involve corn, wormholes and outer space travel. So yeah, keep waiting for that trailer, or if you’re in D.C., hit up a screening of “Hubble 3D” — the promo will be playing at least until “Godzilla” opens, and perhaps longer. [Play List]