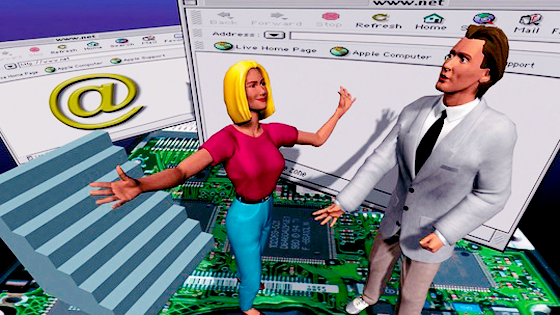 Google has gone ahead and removed the underlined links from their search results. It’s a knife into the gut of my teenage years. Such links! So Geocities. Fuck, man. Time waits for no one, especially the Old Internet. Where format was madness, everyone had a website with their own noodlings, and I could find a fucking link by looking for the underlined text.

Google started life as a research project in 1996 to crawl the internet and create a search engine. 18 years later, Google is now removing the last of the design left over from that era. Starting today, the ’90s-style underlined links are being removed from Google search results. It truly marks the end of an era of the web, with underlined links a familiar method used by web developers to highlight links on sites like Geocities, Altavista, and pets.com. It’s the biggest visual change today, but Google is also tweaking other parts of its desktop search results.

“We’ve increased the size of result titles, removed the underlines, and evened out all the line heights,” says Google lead designer Jon Wiley. “This improves readability and creates an overall cleaner look.” Google is also bringing over the new ad labels from its mobile site, and the whole search interface looks a little more consistent with its mobile and app variants. The changes might seem minor, but for Google it’s a significant change to a search engine that rarely changes its design. It also matches more modern touch-friendly sites that have opted for increased page elements as more consumers move towards tablets and smartphones. It’s not the drastic homepage redesign that Google trialed for less than a day back in 2010, but today signals the end of Google’s 1990’s web era just as the World Wide Web celebrates its 25th anniversary. [The Verge]