Archives
« Sean Murphy’s cover returns us to the ‘REIGN OF SUPERMEN.’
‘TRANSFORMERS: AGE OF EXTINCTION’ Trailer: Marky Mark Is A Prime Father » 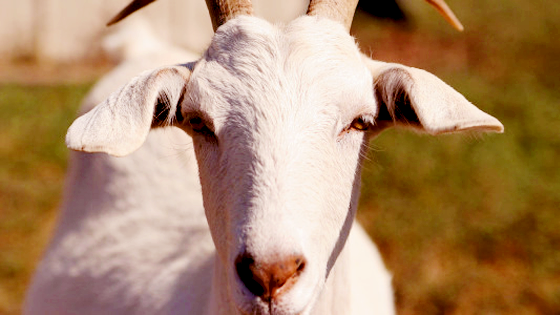 Goats are pieces of shit. Unrepentant, spitting, biting dickheads who occasionally rip up the Internet by yelling in a manner eerily similar to humans. Good news, though. Thanks to Coffee Stain Studios, we’re going to be able to engage in such piece of shit behaviors ourselves come April Fool’s Day. Or as it shall be known henceforth, Douchebag Goat Day.

Alongside the release date, the developers have also revealed a bit of additional information on Goat Simulator. Thanks to the game’s website we now know that Goat Simulator will only appear on PC, and that it will not feature any multiplayer functionality. While Coffee Stain Studios plans to keep the core gameplay in Goat Simulator “small and silly,” the developer is working on adding Steam Workshop support so that players can create new levels for their four-legged avatars to ruin in a flurry of barnyard hijinks.

Goat Simulator has yet to appear on Steam, but Coffee Stain Studios is still allowing prospective virtual goats to pre-order the game via its website. The asking price is $10, but includes access to a beta test for those who can’t wait to live out their inexplicable dreams of being antisocial livestock. [Joystiq]