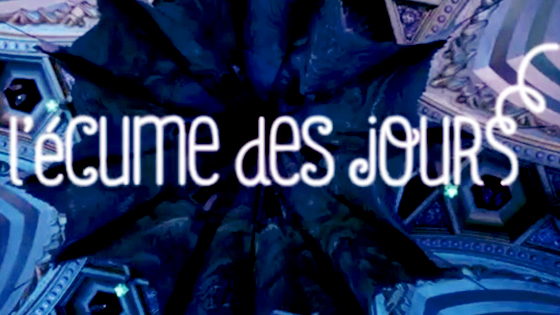 Let’s get the apology out of the way first. To the crew and passengers aboard the ship, I’m sorry for being so unacceptably neglectful of my duties. However, I’ve been building you all a present. Come down any time you want and visit me just off the engine room in our brand-spanking new Dreamatorium. Not as technologically advanced as a Holodeck, but it works in an overly imaginative pinch.

This has been an odd year for me, happily ending on some pretty high notes. There were a few really incredible things in the ramp up as well. Some of you may have read my coverage last February of CommuniCon. Easily the happiest and most cathartic 48 hours of my entire life. Not even a question. I’ve been to some incredible comedy shows and just found out Nerdist is now offering sketch writing classes. This revelation prompted my very good friend to grab me and say, “Screw UCB. THESE are your people.”

In that vein, in terms of work I’ve just recently (read: haven’t even been there for a month) moved outside the industry. I work for Pabst Brewing Company now and it’s pretty damn hard to have panic attacks and fear about your job security when everyone you work with is a chilled out hipster. This means that I’ve actually been able to focus on my writing.

I also very recently acquired a partner. We met maybe 2 months ago and it was pretty instantaneous that we knew we were supposed to work together. I’ve been more prolific than I’ve ever been and it’s such an incredibly freeing and productive feeling. So now that we’re caught up to speed with me, without further ado, from the Comedy Sector of our space dwelling collective I present, Nico’s picks for 2013.

Best movie: I’m naming this The Amazing Annum of the Apocalypse. This Is The End and World’s End were both brilliant movies that based on content and release dates could have easily drowned each other out, but instead gave hysterical and stereotypically (for both sets of filmmakers) varied views on end of days. I also genuinely enjoyed Elysium. A villain you can root for, stunning visuals and a whole bunch of explosions. In a summer when Caff Pow and I were drowning in baseless, unintelligent, but most importantly UNENJOYABLE action movies, consoling each other with reminders that Awards Season was coming up and our brains would right themselves, Elysium was a gulp of fresh air for me.

Honorable mentions: Anchorman is one of my all time favourite movies. I saw it in the theatre and didn’t even remotely chuckle. It wasn’t until the 3rd time I watched that it clicked with me. Anchorman 2 had me roaring in the theatre. Positive sign for re-watch. The Way, Way Back is one of the most perfect indies I’ve seen, ever. Safety Not Guaranteed, Bachelorette and John Dies At The End all made me happy as well. Unpopular opinion comin’ atcha. Bridesmaids is a piece of shit. AWFUL film. Bachelorette NAILED it. And who doesn’t love some Lizzy Caplan and Adam Scott? If you don’t you’re obviously dead inside.

Best TV:  New show I don’t think anyone’s watching but everyone should…Thursdays at 9:30 on NBC. The Michael J. Fox Show. To paraphrase my father, “He’s obviously not just making TV to make it. This is his life, it’s funny and he thought he should share it.”  #passionproject. Will Gluck (Easy A fame) is the showrunner. Dan Harmon has a new animated series called Rick and Morty. [as] Mondays at 10:30.  It’s a high-concept sci-fi comedy. Vastly inappropriate, wildly off it’s rocker and consistently fun. Brooklyn Nine-Nine came out swingin’. When the cold open of a pilot has you breathless and in tears from laughter, you pay attention.

Best Books: Honestly, I know I’ve read this year, but I can’t remember much. I discovered Bradbury (one of those required reading things I didn’t “get” in school, but am obsessed with now). Martian Chronicles is the mothereffin’ jammage. Currently working on Street Gang: The Complete History of Sesame Street. Ganked it for free off of my writing partner. SO engrossing and informative.

Best Comics: Went to this symposium/panel at the Downtown library on historical graphic novels. Gene Luen Yang spoke and he is a god amongst men. Had to buy Boxers and Saints when I hit my store the next time.

Best music: My definitive albums of the year were Robert DeLong’s ‘Just Movement’ and Steve Martin and Edie Brickell’s ‘Love Has Come For You.’ Music produced from game controllers and banjos. Dichotomous, I know. I’m a Holden Caufield-esque walking contradiction. Shut up about it.

Honorable Mentions: Dad brought Kat Edmonson to my attention. Her cover of ‘Just Like Heaven’  (amongst other numbers) moves me. Childish Gambino and pretty much anything The Neighbourhood or Woodkid did.

Things I wish I had done: So many Opinions Vary posts. Contrarianism for the sake of being contrary is just plain fun. Can’t beat playing devil’s advocate.

Majour disappointment of 2013: L’Ecume Des Jours still doesn’t have a US release date as far as I know. Get your act together Gondry!

Congrats to my cohorts for their myriad accomplishments. And to those of you I’m not quite lucky enough to interact with, happy, incandescent thoughts to you and yours in the coming year.