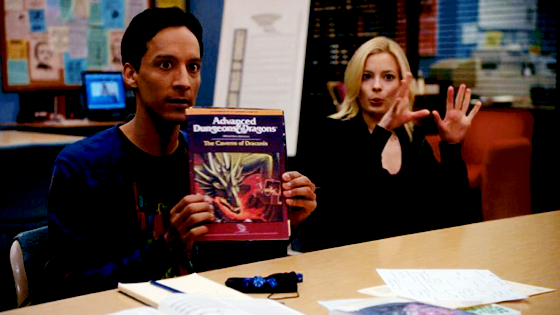 Oh man Dan Harmon I love you. Somehow you’ve clawed your way back onto the Community throne and you’re using your powers to bring us seeming glory in your show’s fifth season.

Get ready for the return of Bing Bong the Archer, Hector the Well-Endowed and Marrr. Community is making another Dungeons & Dragons episode! With special guest star David Cross! Which is hilarious considering NBC tried to kill the original beautiful episode before it aired.

“Advanced Dungeons & Dragons,” is hands down one of our all-time favorite episodes of television, ever. And now we’re getting a sequel, it’s hard not to squee. According to Vulture, and an official description of the new episode, Cross will star as Hank Hickey, the “bitterly estranged son” of Jonathan Banks’s new character.

Banks (whom you may remember fromBreaking Bad) is a new series regular and stars as the criminology professor for Greendale. His son Hank (according to the description) “joins the study group for, at the very least, the second most important game of Dungeons & Dragons ever.”