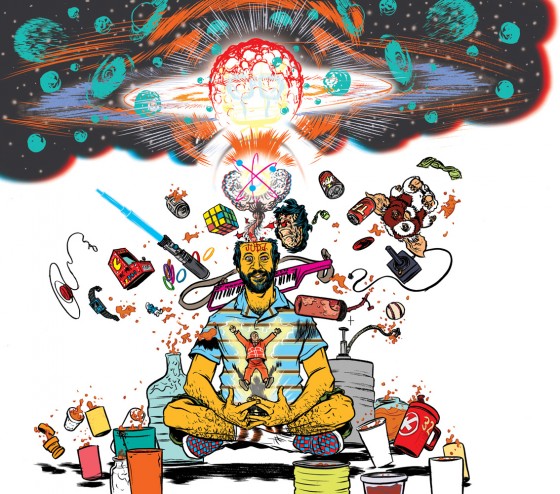 Being funny is really difficult. In fact, it’s so difficult that I don’t even try to be funny (and my writing for Omega-Level records this abstention quite nicely). And to prove my dedication to humorlessness even more in this OV piece, I am going to do one of the least funny things a person can do: I will try to discuss some qualities of comedy methodically by submitting my sober thoughts on a comedic modus operandi that’s used today to an overwhelming degree: pop culture referencing. So, please, sit back and wallow in my unfunny criticism of pop culture comedy.

Everyone who frequents this site is more than aware of pop culture references. Hell, we dabble in the business of showing our pop savvy quite often, and it can be a lot of fun—and more to the point, a well-placed reference can be very funny. In our society inundated by mass media and catchy marketing, where we are exposed to more pop culture sources than ever before, it’s no wonder why we often find ourselves communicating with each other so allusively. We pick up all these catchphrases and concepts and sometimes use them within the contexts of our own lives and discussions with other people. In a way, we’ve become more pop-cultured, accustomed to using and understanding these allusions as a go-to method of relating to the world or, in this particular case, relating what can be funny about it.

Likewise, contemporary works of comedy have reflected this cross-pollination (and, in turn, we audiences mirror them, trying to be funny, and the cycle continues). These comedies do their part, be it directly or indirectly, to chronicle the zeitgeist in a humorous way. Now, everything that has ever been or could be referentially funny in pop culture is at an artist’s disposal; it’s all there waiting to be drawn on to provoke laughter. And such comedies can do very interesting things when a reference connects with what’s happening within a work, and in doing so, recontextualizes the reference itself and makes it new—and, ideally, newly funny. This interplay can add a lot, to the point where the allusion becomes an essential component that contributes to the whole work’s excellence. When this is accomplished in comedy, the pop culture referencing can make it as dynamic and as funny as ever.

However, this is a best case scenario, and all too often I see scenarios and scenes flounder under the weight of an almost insatiable need to make pop culture references, to allude to other things to get a humorous point across to an audience, and ultimately to show that there’s very little if anything intrinsically funny going on without them. There’s an overload of pop culture referencing for the sake of itself to the extent that there are works that exist solely to riff on other, usually better creations (like the later installments of the Scary Movie franchise, for examples, which are perhaps the worst case scenarios). Audience’s recognition of the references is what’s supposed to be funny, not what the references actually do in the new context. These references serve as lazy shorthand to cue the audience in on the fact that the artists (or characters or whoever is making the reference) are aware of pop culture happenings and hope that referencing bolsters the own work in a comedic way—as some kind of transference from one to another-. But these artists ultimately forget a vital element in the process: to use the references in a funny or meaningful way. Consequently, they end up calling attention to how little the work has to offer as a whole and how few laughs there are to be had when experiencing it.

Moreover, some works employ these allusions so much that their collective usage functions better as a sort of pop culture quiz than as a self-sustaining comedic work. These seemingly endless strings of references wring out any sense of vivacity because, if a viewer doesn’t catch some of the references, then much of what the work tries to convey is lost, and any intentional laughter (unless produced by confusion or a perceived randomness) is silenced. But, strangely enough, I take some comfort when witnessing examples of undue pop culture referencing because an overly allusive work is the most temporal type of art and will probably be forgotten in due time. In the end, these futile attempts at being current and culturally in-the-know detract so much that the entire work can’t operate well without an audience’s knowledge of the time it depicts and the sources it draws from. The referencing signals how fleeting the whole work is, where each allusion offers little more than transitory chuckles from only those who digest pop-culture ad nauseam and find this type of humor appealing. And the more a comedic work tries to keep up with the times by resorting to contemporary allusions for most of the laughs, the more it will lose its comedic effect down the line for future audiences. More likely than not, there will be no sustained laughter (and if there is, it will be for all the wrong, unintended reasons) because the references weren’t organic jokes or intrinsically comprehensible in relation to what was going on in the work; rather, they came from other places in popular culture that this audience isn’t privy to.

Still, when I come face to face with a work that utilizes pop culture references in a way that makes me laugh, I oftentimes conduct a little thought experiment after I’m done enjoying it. I revisit the references in question, and think not only about how they work in the context of today (along with the work itself), but I try to contemplate how they would be understood outside of that context, especially if I didn’t know anything about the references’ original sources. Furthermore, I wonder if there is enough about the references in its new form for a person to get the joke, without footnotes or research or any type of explanation (all of which are unfunny to varying degrees) to enhance comprehension and comedic effect. Obviously, I’m not precisely sure of how it would be interpreted by this hypothetical audience, but there’s a very good chance that the more pop culture references used, the harder it becomes for this audience to find it as funny as I did in the first place. I realize this mini-thought experiment is a bit excessive, that I should just enjoy the reference or disregard it if I don’t, but I believe it’s a natural reaction to excessive pop culture references out there today. I can’t help thinking that many works will seem unintelligible and unfunny soon enough, but perhaps that’s something that every generation grapples with. After all, the test of time is a funny thing–maybe the funniest.

But what do I know? I’m incapable of being funny, and thanks to this OV, I’m now pretty sure I’m not a good judge of what’s funny either.

So I put it to you, my Omega-Level friends? What do you think about pop culture-oriented comedy? Are there any works that succeed because of their allusions (and are these works potentially lasting)? And conversely, are there comedies that fail because they depend too much on them?