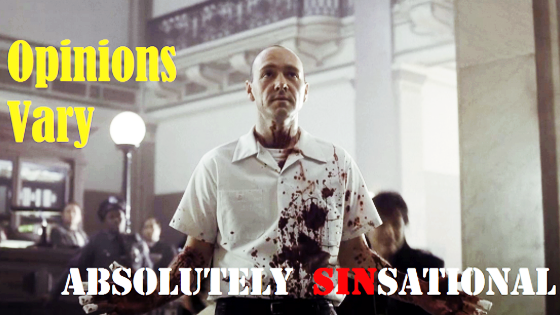 Hi boys and girls.  We’re a week out from Halloween, so I figured I’d do a theme OV this go around.  Today we’ll be talking about sin.  Shut up, it is too Halloween themed!  I’m sure everyone at this point is familiar with the concept of the seven deadly sins.  You know, Wrath, Greed, Lust, Envy, Sloth, Gluttony, and Vanity.  This week’s OV is very simple.  Choose your sin.

The Dude’s Sin?  Easy.  Sloth.  I am a lazy motherfucker.  So lazy in fact that I considered ending this article with this next sentence.  I’m so lazy, that even though it takes little to no effort, I really don’t feel like writing this article any longer than it has to be.  You see, if I had ended there, it would have been a bit of a joke about how I indeed chose sloth and would get me out of writing any longer.  However I enjoy writing slightly more than I enjoy not writing, so I’ll go on.

How could I arrive so quickly on one sin over another?  It’s a simple process of elimination.

I’m not really a vengeful person.  If people wrong me, I try to learn a lesson so it doesn’t happen again, and will more than likely avoid that person in the future.  I enjoy watching violence, but not really participating in it (outside of video games).  So Wrath is kind of out the window.

I’ve been told that I can be very generous at times.  Since my sociopathic brain is set to chaotic neutral, there seems to be little pattern in my behavior.  What that lack of order shows is that I am more willing to share than I am to not share.  At that moment, Greed was bankrupt.

Lust made a bid for the top spot in my sin pyramid.  However I ruled it out because of my ability to suppress it.  If you control something, then you have power over it.  I can control my lustful feelings, so therefore I have power over it and not it over me.  At that moment, I dumped Lust.

I have never understood Envy.  It always seemed foolish to me.  I have always accepted who I am, so to look at another person and feel Envious of what they had seemed as useful as looking at birds and feeling Envious that they could fly.  Sure in a fun, childlike manner, that is harmless, but where the sin is concerned, a genuine hatred for other people who have what you want develops.  I can appreciate that some people have it better than I do, but I know some people have it worse.  If I don’t want people hate me because of what I have, I shouldn’t do it to others.  I did not resent eliminating Envy.

Gluttony made as strong a push as Lust.  I have something of an excessive personality.  If I like something, I want more of it.  Soda?  10 cans a day.  Fried foods?  10 times a week.  Cheese?  By the pound.  Candy?  Constantly.  It was this sort of attitude that ballooned me to over 300 lbs.  In the past 6 months, I’ve quit soda, reduced my fried food intake to about three times a month, all but eliminated cheese and milk, and given up candy and sweets.  I’ve dropped about 70lbs (and didn’t work out once!) and have gotten a handle on this particular demon.  Since I control it, I had to purge Gluttony.

Despite Gluttony and Lust getting close to the mountain top, Vanity takes my silver medal.  Everyone likes hearing how great they are.  I’m no different in this respect.  It feels good.  How is this different than other euphoric releases triggered by Gluttony and Lust?  Vanity’s itch is scratched by an outside source.  I can eat some disgusting yet delicious food and satisfy the inner Glutton.  I can watch some “choice movies” and “exorcise” the Lusty demons.  However with my Vanity, I require adulation from others.  I can’t pin someone down and make them tell me how awesome I am.  It has to be organic.  It’s something that is beyond my control.  Since I told myself years ago to no longer worry about things that are beyond my control, I had to put down Vanity.

So what sin takes your cake (and maybe eats it too)?

I have a feeling that the only correct response to this post is “Dude … TMI”.