Archives
« ‘ALWAYS SUNNY IN PHILADELPHIA’ will END with SEASON 10. I understand. I frown.
‘EPISODE VII’ RUMOR: RYAN GOSLING and Zac Efron UP FOR ROLES » 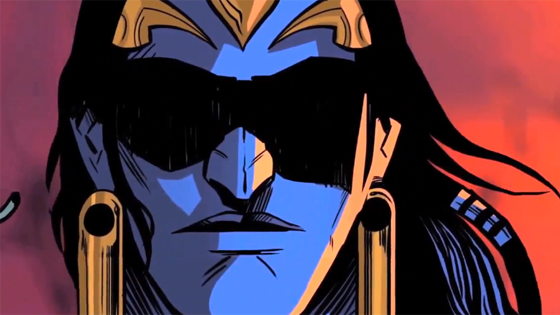 Only Grant Morrison, man. Only he would helm something as fucking wonky as this. And, don’t get me wrong. I’m stiffened in the groin-parts for this. Precisely because it is Grant Morrison.

Hit the jump for a trailer, and more info.

Looks like Stan Lee isn’t the only comics creator getting into the growth market of Indian superheroes.Grant Morrison, who is wrapping up his years-long run on Batman with Batman Incorporated #13 tomorrow, has announced one of his next projects will be an animated superhero epic based on Indian mythology called 18 Days.

Morrison is partnering with animation firm Graphic India for the series, which has the lofty goal of chronicling “the climactic war that ends the era of supergods and begins the age of man.” Oh, is that all?

The story’s an adaptation of the epic myth of the Mahabharata. Morrison elaborates:

A genre mash of superhero action and mythology grounded in the all-too-human passions of its warriors, villains and monsters, 18 Days will rewrite the rules of epic fantasy…  18 Days updates and retells the timeless stories of the Mahabharata for a new audience on a whole new platform.