Opinions Vary: I want to believe 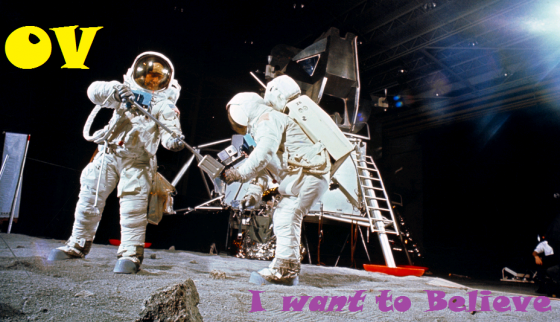 Today’s Opinions Vary will touch on a subject near and dear to my heart.  I am talking about Conspiracies and Conspiracy Theories.

It’s hard to explain my relationship with conspiracy theories.  I love them.  I love listening to them, I love reading about them.  I also love poking holes in most of them as they are largely bullshit.  You see dear reader, I am a skeptic.  Pull up a chair, hit the jump, and let’s break this mother down.

I’m not going to say that I don’t believe any of these theories.  For example I do believe most of what I read about the FED and how bankers artificially devalued the American dollar to create larger profit margins at the expense of the American public.  I have no proof beyond thinking that most bankers are assholes that would do that if it meant more money for them.  While I don’t think there were meetings and backroom dealings, I think that a few people started doing the scam, then a bunch more people hopped on when they saw it starting to work.

I also believe that there is something fishy with TWA 800.  I’ve never really bought the cover story of the center fuel tank exploding being the cause of the crash.  There are far too many eye witnesses that are independent of each other that all say that something rose up and struck the craft.  After watching a documentary, and then reading more about the investigation, there are a lot of inconsistencies.  I don’t know who, or what caused the crash, but I don’t buy the official story.

People talk.  They do.  People love to tell other people about they shit that they’ve done just to wow them or top a story.  I love using this one to debunk some of the bigger conspiracy theories.  It’s a huge nail in the 9/11 truthers arguments.  For those of you unaware, Truthers believe that the US government was behind the 9/11 attacks and used special forces to wire up the Towers to blow and then crashed empty planes into the buildings.

So my response to this is to wonder why some military demolish experts didn’t think to ask “Hey Sarge (I just assume everyone in command is a Sargent), uhh, Phil and I were talking and, well, we just don’t know why we’re secretly rigging up two of the most utilized buildings in the world to blow up.”  “It’s a training exercise, get back to work!”  Later when the building blows up, don’t you think you would have had an influx of troops saying that they did it?  Seems a little troubling.  So whenever you are faced with a grand sweeping conspiracy, think about the little guys in it.  Can they be used as pawns so easily?  Wouldn’t they talk about what they did and where they were?

This one comes up a lot when talking with true blue, died in the wool conspiracy theorist.  They don’t believe ANYTHING.  I think everyone has a friend or two like this.  I often ask them if they believe any official story.  The answer is usually a no.  So at that point, they pretty much just become a contrarian or a troll.  They are the kind of people who dislike cute kitten videos on Youtube.  It’s hard to take them seriously when everything is a conspiracy theory to them.  I will agree that this is more of an attack on the person than conspiracies in general, but it’s these types of people that start conspiracy theories in the first place.

We landed on the Moon.  This is the big one.  Well, this and the Kennedy assassination.  I find it hard to believe that the government could have pulled this one off.  If you remember back to my first example, people talk.  So on July 20th, 1969, Apollo 11 lands on the moon.  Are you going to tell me that a week later one of the “film crew” wasn’t going to be bragging to his friends that he was the best boy or the key grip or some other silly sounding name?  Think the government would go out of their way to discredit them?  Ok, I can buy that one, but how about the level of technology?  In 1969 it would have been easier to go to the moon than to fake it on the level at which the footage appears.  The same people that say we had Alien technology in the 50’s due to the Roswell crash then turn around and say that we didn’t have the technology to go to the moon over a decade later.  Inconsistency, man, it will get you every time.

So how about all you Omegaites?  Do you buy into the web of conspiracies?  Do you fall in line with the man and think all those people are kooks?  Or do you decide on a case by case basis.  Don’t forget to post your favorite theory and whether or not you buy into it.