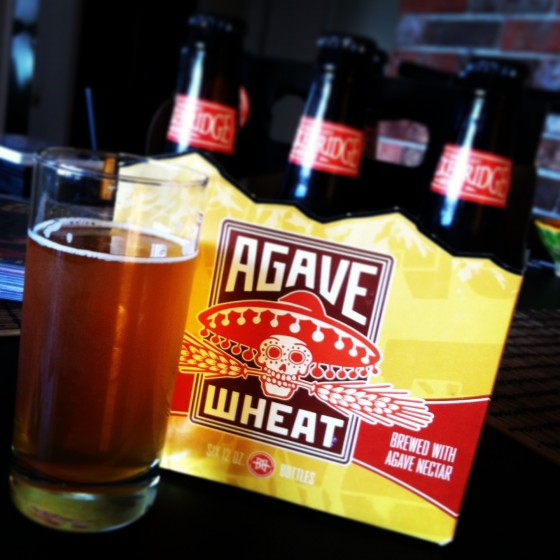 Now, I’ve never been to the state. But even from my perch aboard Spaceship OL, it ain’t hard to discern that Colorado is a multifaceted wonder. After all, it was the thirty-eighth entry into the Union that bore the mighty Tim Allen, creator of America’s greatest sitcom about a tool-man. Lest we not forget that Colorado gave refuge to a Boston hero and allowed him to become a champion. And then, of course, there’s always South Park.

Again, I ain’t never been to Mexico, neither. But there’s plenty to appreciate about the nation. First of all, the Mexican flag features an eagle tearin’ a snake to shreds. Epic! Brutal! Awesome! There’s also the fact that Mexico is responsible for the taco. The goddamn taco! If there was ever a perfect food, it could very well be the taco! And if this didn’t win you over, the Land of the Shaking Earth was also the site of one of humanity’s greatest triumphs.

And now that I’ve discovered Agave Wheat, I can express my love for both Colorado and Mexico by drinking!

So here’s the deal: Denver’s Breckenwridge Brewery has crafted a a wheat beer that incorporates essences from agave. What’s agave, you ask? Well, an agave is a plant that is indigenous to the Americas, and is marked by leaves and flowers and stems and whatnot. Y’know, plant shit. Anyways, the reason why agave is so damn important is because it’s a key ingredient in tequila!

That’s right — tequila! The stuff you drank in Tijuana before watching the donkey do that thing that you never want to think about again!

Anyways, Agave Wheat presents itself as an unfiltered wheat ale that is “brewed with agave nectar.” I’ve never been told how nectar is extracted from agave. With that being said, I’d like to think that the process involves a grey-bearded warlock with daddy issues who’s so determined to go on a bender and bang a dragon that he’ll stop at nothing. Didja hear me? He’ll. Stop. At. Nothing.

Even if it means conjuring nectar-spirits out of an agave and then commanding them to possess a beer-potion!

So how was my Agave Wheat experience? Tremendous. When I poured the brew into a drinking glass, I first took note of its visual and olfactory qualities. Even to my tired `ole peepers, this ale is a durn beaut, settling into a hazy golden/orange with the faintest sliver of white foam adorning the top. On the nose-front, this ale delights with sensations of grain and light-sweetness and maybe even a bit of citrus. What a excellent ale to be in the presence of!

Fortunately, I was just as pleased during the actual drinkin’ experience. The ale comes out from its corner with an uppercut that hits the tongue-buds that’re designed to detect malty-bready-sweet. However, there’re then a few jabs of orange, and perhaps a coriander-eye rake. Very delectable. Moreover, the brew is wonderfully light-bodied, allowing for an ease of drinkin’ that’s sure to make your life-worries fade into oblivion.

Agave Wheat ain’t no sort of boiler-maker that sees you droppin’ tequila into a witbier. Instead, it’s a delightful cross-pollination of North American legacies, a midnight rendezvous between Colorado and Mexico. And let me tell you – things’ve gotten hot and heavy.

This is a perfect beer for drinkin’ on summer nights.