Archives
« DC ALL ANNOUNCING some CHOOSE YOUR OWN ADVENTURE digital comics. 1990++
KOJIMA IS F**KING TROLLING US, RIGHT? KIEFER SUTHERLAND is voicing SNAKE in ‘METAL GEAR SOLID 5.’ »

Opinions Vary: When The Action-Packed Becomes Too Packaged 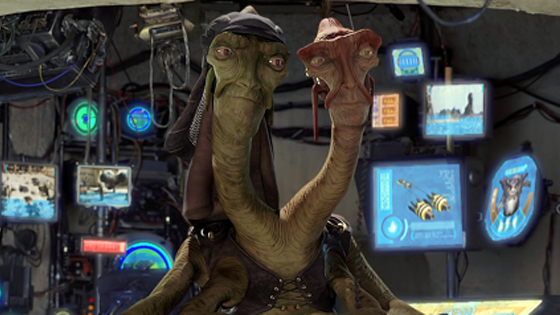 Imagine, if you will, the following scenario: You’re sitting in a movie theater, enjoying a nicely constructed action sequence on screen. Everything is working and you know the stakes involved because you’ve been paying attention the whole time and the present action, to its credit, is coherent. However, just for good measure, punctuating the sequence, some guy next to you starts to narrate the events, giving a play by play of every punch thrown, every kick dropped, every daring move displayed. And, to top it all off, he’s even thoughtful enough to add some recaps and character motivations, just in case you’re confused about what’s going on or you missed something that happened earlier in the proceedings.

Most people would find this annoying, but this type of excessive exposition exists in many movie theaters because they’re built into the movies themselves. Granted, the previous scenario hinges on exposition coming from outside the narrative, but I’d argue that how it’s employed within the movie, as it is oftentimes used, is as peripheral and distracting as that. And it’s this phenomenon that I want to investigate in this week’s OV: the positioning of insignificant, less-than-minor characters—typically in the forms of sports commentators and news reporters—at the forefront of an action sequence in order to explain things that are already comprehensible.

We’ve all seen it before: During the big sporting event, there’s a sportscaster (and oftentimes a color commentator) present to give his take on the game as it progresses. Or, during an action sequence, there is a reporter live at the scene to give an update, summarizing the odds the hero is up against. When these characters appear, they usually don’t have much to offer, maybe a fact or two that the audience knows already. They function as little more than a means to make it all seem a little more realistic—verisimilitude personified. A big sporting event gets media coverage; a high speed chase or a shootout will be televised on the news. It’s just what happens in reality, and if an audience is to feel like what’s on screen could happen, then an audience can deal with the bystanders of such a conceivable reality.

Now, I won’t knock a movie for simply striving for a sense of verisimilitude. Having a sportscaster commenting at the big game or a reporter covering a climatic showdown is not inherently bad because those characters would indeed exist in those locales, during those key moments; it’s their place of work. However, verisimilitude in fictional works remains but a semblance of the truth; the fiction (or the potent fictional qualities that come with the form) ultimately takes precedence over it and to let such secondary characters get in the way of telling a good story (by repeating the good story being told) is a strange way of going about storytelling in the first place. Furthermore, in these specific action sequences wherein the expositional characters reside, verisimilitude isn’t the most important narrative endeavor because pulse-pounding kinetics, more than not, wins out over pain-staking plausibility; explosions blow away exposition in the moment.

There’s an well-known trait that runs through most, if not all, great sports movies (a strain that I believe is also manifest in a comparable number of great action movies, as well): the action derive its power from what happens outside of their respective fields or courts, so that when the players actually step foot on them, into the big game(s), they are playing for something bigger than the game itself, something that counts more than the count on the scoreboard. That off-field significance carries over to the game and, ideally, the audience has gone along for the whole ride, knowing exactly what’s riding on the outcome. And because of that significance, that ability to be bigger than the game and explosions, the movies are more than just sports or action genre exercises; they are great character pieces within sports/action movies. So, when those big moments in the movies arrive, an audience doesn’t need any help understanding the implication; the causes are known, and the potential consequences, for good or ill, are going to play out perfectly fine without a reporter announcing it–especially when that reporter has no connection to those stakes outside of the big game or action sequence, which is often the case.

The exposition, therefore, ends up being evidence of bad writing (or, on a larger scale, sloppy filmmaking) because, regardless of whether the information is well-known or not, its dissemination by way of the reporter makes it superfluous. If the sportscaster/reporter is only explaining what is happening on screen, and offers nothing more, then it’s redundant. And in a medium that depends mainly on visuals, what we are capable of seeing (and understanding through sight) trumps what can be said about it. This especially holds true for an action sequence. At the center of these moments, there are the doers (the players, heroes, villains, etc.) and everyone else on the sidelines. On the other hand, if the exposition gives actual insight into the main character’s actions, motivations, or overall scene, then it amounts to a more unforgivable example of bad writing (more so than annoying, yet somewhat harmless redundancies of giving widely known information) because that information ought to have been conveyed through other means (ideally, through the action itself, or through previous scenes before that action). There is a jarring clairvoyance that comes into play when the reporter speaks in an insightful way, as if he/she not only knows what’s going on, but he/she can see into the heart of the matter/main character(s). At that point,  the writer is basically cueing an audience in on something that hadn’t been properly conveyed beforehand, thus making the reporter less organic, defeating any attempt at verisimilitude. And instead of buying into the idea that covering the action scenes is the reporter’s job, an audience winds up thinking that that reporter was mere placed in an action scene to cover the writer’s ass.

Certainly, there are examples where these characters can work (even to great effect), but they are usually more than secondary characters who show up for a sequence or two and have nothing more to do; they end up being more integral to the story at hand. But more to the point, the ones that work the best are those who, whether they know it or not, subvert what is known and observable to an audience by how they choose to report (which is why these characters work well for laughs, or in comedies. Example: “Just a bit outside“). But still, when it comes to action sequences and important sporting events, drama is usually optimal, the driving force behind it all, and the thrill that audiences get from watching that drama unfold can be greatly diluted by dissection. It can undercut what is being done if the spoken words don’t connect to the action in a meaningful way. And if the speaker isn’t meaningful to the story itself, then his ability to truly comment on the meaningful action most likely doesn’t line up, making the commentary detrimental to the movie.

Ultimately, a simple way to avoid any unnecessary chatter in film would be this: Let the moment speak for itself or, if verisimilitude is truly attempted, let the moment have the final say. If there are to be sportscasters and news reporters present, then make sure their speech detracts as little as possible from the actions (and many good movies wisely downplay and drown-out these commentators during such central parts because the commentators aren’t central at all). Too much talk takes away from the action, especially if the ones doing all the talking aren’t participating in it. Likewise, the spotlight ought to be on what’s being covered, not the coverage.  Audiences don’t need a one-person Greek chorus to show up and chronicle the great characters or their fantastic displays before us, because such characters and displays are already before us on the big screen, and the audiences is perfectly capable of watching incredible feats without someone telling us how incredible they really are.

Open for discussion: What are some movies that have some irritating commentators, who explain too much or do it in a fashion that takes way from the action?