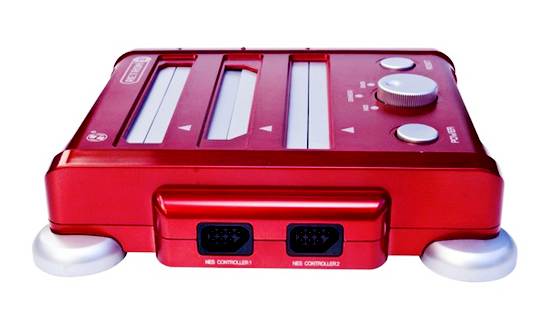 As someone who has been itching to play through his old ass gaming collection lately, this console is fucking perfect. Sure, I could use an emulator, but I want to use the original controllers. On a television. So fuck yes, give me this ghastly blight on gaming creation. I need it.

With a new generation of game consoles on the horizon, people have had backwards compatibility on the mind. For those who want to play old games without keeping a ton of old consoles around, there’s the Hyperkin Retron 3, which can play NES, SNES and Sega Genesis carts all in a single unit.

This week, Hyperkin announced their newest console, the Retron 4, which is even more ambitious than the 3. (The 3 is pictured above.) It’ll add Game Boy Advance compatibility to the mix, as well as HDMI output.

From the Retron 4 press release

Nice. Given that the image up top is of the Retron 3, it’s still not clear what the 4 will look like. Maybe something less candy-colored? Though hell, this thing could be bright green and orange and I’d still want one. Hyperkin says they’ll announce more details about the Retron 4 at theMidwest Gaming Classic in March.

Tags: fuck yes, give it to me, hyperkin, retron 3, ridiculous