Archives
« The Snow Is What You Make of It
Press Start: Exclusive Blanka Colourway »

Hey you! Yeah, the turkey holdin’ the comic book! Why don’t you c’mon in? Oh, you’re not hungry? Well that doesn’t matter – you’re goin’ to want to check this place out. Of all the dining halls on Spaceship OL, this holodeckin’ eat-a-torium is most guaranteed to satiate your fanboy-cravings.

This is, after all, the Comic Book Café.

Now, I feel obligated to offer a word of warning. In spite of the innumerable perks that come with eating in a livin’ and breathin’ paneled-page, there’re some definite drawbacks. The lunchladies are cranky. The pizza’ll burn the roof of your mouth. And the cliques are unbearably divided.

By the Coca-Cola machine sits the Marvel crew – Peter Parker and Joe Quesada are trading yogurts, Betty Banner is smashing a watermelon with her fists, and Tony Stark is sneaking rips of gin out of a Gatorade bottle. At the top of the café is the DC posse – Wonder Woman is givin’ catty glares as Clark Kent sucks on Lois Lane’s bottom lip, Dan DiDio is nose-vomitin’ milk while he guffaws at Plastic Man, and Swamp Thing is tryin’ to extol the virtues of using a canteen instead of Styrofoam cups. And if you look between these two, you can see the IMAGE gang hanging by fire exit – Brandon Graham and Jonathan Hickman are hackin’ away at sketchbooks, some nutjob wearin’ headgear is claiming to be a prophet, and baby Hazel is cryin’ for milk.

It’s quite the scene.

But it’s not the whole scene. Sure, these three tables are the most jam-packed and rambunctious, but that doesn’t necessarily mean they’re the most exciting. If you’re lookin’ for a bit of adventure, why not take your tray to one of the other tables? What’s that? You thought that those three cliques were the only patrons of the Comic Book Café? Way wrong, bro!

Hey, take a seat at that small table next to the Art Club sign-ups. Yeah, the table with the dudes that don’t really look like anyone else in the cafeteria. This squad goes by the name of 215 INK, and they pride themselves in their independence from the other three. Once you get situated, you should strike up a conversation with the dude rockin’ the beautiful beard.

His name is Mauricio Pommella and he’s the illustrator of TRANSMEET, a comic about trying to grow love in the depleted soil that is our inevitable dystopia. 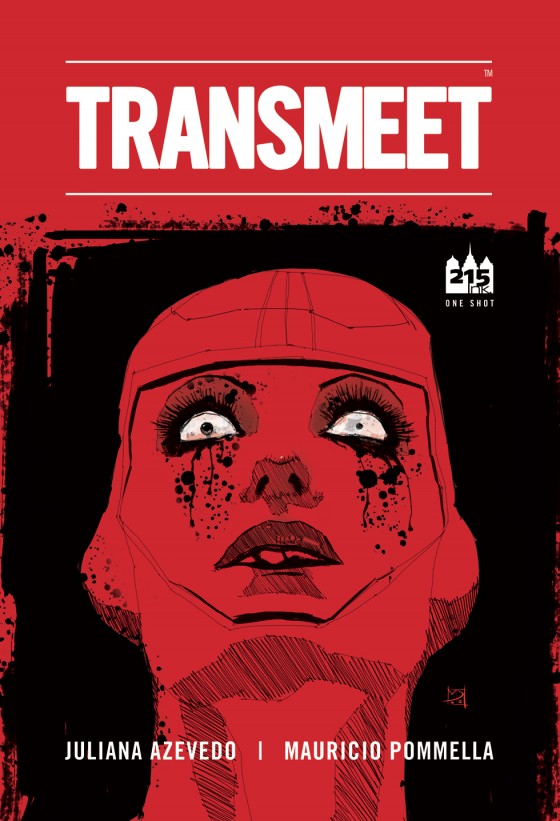 – For those who’ve never stumbled across the name Mauricio Pommella, how would you describe your current position in the omnidimensional ether? What’re you currently doin’ and how’d you get here?

Son of Italians, born and raised in Brazil, now living in Canada.

Inspired by my father, I have become a visual artist, communicating ideas through illustration, graphic design, art direction and photography.

I started drawing when I was very little and I remember drawing all the time…I guess that became the driving force who led me to a profession involving artistic skills.

Currently I’m a senior art director working for an advertising agency by day and an independent comic book creator by night.

During the night shift I have a few hours when I can dedicate to my independent comic projects. Currently I’m in between projects. TRANSMEET was recently launched by 215 Ink and I’m starting to plan the next project – probably a series of short stories so I can put my stuff out more frequently.

– What can you tell us about TRANSMEET? There aren’t too many detailed descriptions to be found online, but I’m thinking that this one-shot summons the spirit of Ridley Scott’s futuristic-grime. Am I way off?

You are very close for sure. Juliana [Azvedo – writer of TRANSMEET] and I don’t believe the future will be a pretty place to live in.

TRANSMEET is a story about relationships, and the futuristic element comes in the background, making the story more interesting and visually appealing. All the technology surrounding the characters contribute to the storytelling, but if you strip all that information down the story is about a guy and a girl that love each other but are gradually taking their lives into opposite directions. In this futuristic world humankind has evolved, but not for the better, amplifying most of the bad things we know. 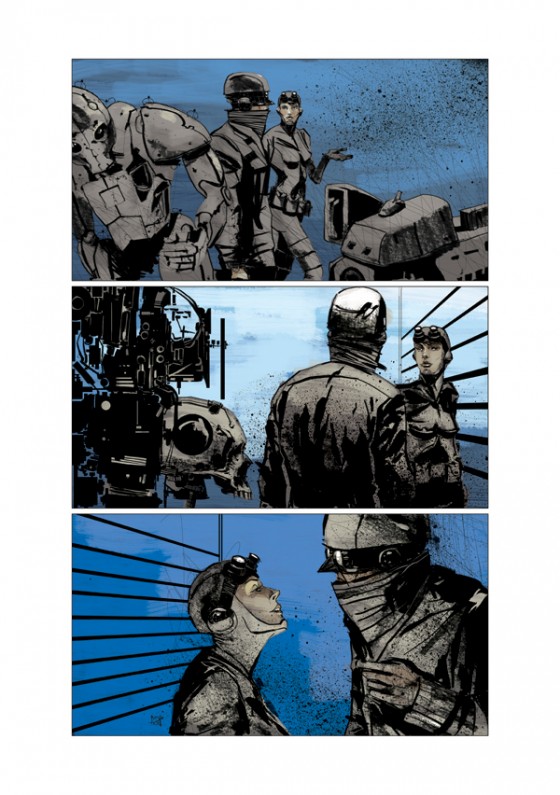 – How did you come to collaborate with writer Juliana Azevedo?

Back in Brazil, I had the opportunity to work with Juliana for a few years At McCann-Erickson (an advertising agency) in the same creative team. Since then we have remained friends and we always talk about storytelling in general. You know, in the end that’s what we do to sell products and services: we tell stories. One day I asked her if she would be interested in collaborating with me creating a comic book story and that’s when Savings Account (our first story) was born.

Oh by the way you can read Savings Account here.

Or you can get a hard copy here.

– How would you describe your relationship with 215 INK, publisher of TRANSMEET?

I guess those are the core values in our relationship. On top of that, we are all digital-savvy, reducing time response and publishing our work in more effective ways. 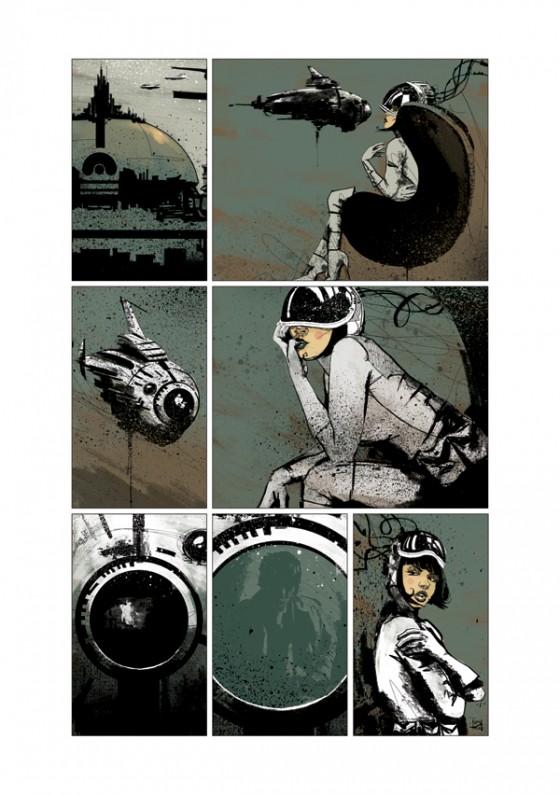 – Who’s in your cadre of artistic influences? Looking your glorious illustrations, I’d guess that Bill Sienkiewicz is in there somewhere, but I’m just an over-caffeinated hack with double-pane glasses.

You are correct, Bill is my main influence. I guess it all started in 1986 when I got a copy of Elektra: Assassin – that changed everything. And later on I met the art of Sergio Toppi, Ashley Wood and Kent Williams. I really love the sketchy/noir style.

– What’re the comics that first got you interested in the medium? What books are you currently enjoying?

My father introduced me into the world of comics, first with Charles Schultz’s Peanuts, then Alex Raimond’s Flash Gordon, Secret Agent X-9, and then Moebius. From there I started to focus on heavily well drawn stories, as I don’t have any interest in good stories poorly executed.

– Outside of the comics-realm, what inspires you creatively? Music? Movies? Your boozehound mailman who waxes nostalgic about the midnight-release of RAMBO III?

From a storytelling perspective, I’m inspired by movies and TV shows for sure. I’m a big fan of Breaking Bad. It’s a nice example of exploring different ways to break up the plot and explore new forms of narratives to build up the conflict and tension among the characters.

But from an aesthetic perspective, graphic design is my main source of inspiration. It’s all about composition, the well-cropped photo, the correct typeface nicely placed, design elements that will reinforce the message, the correct color palette to set the emotional tone. In the end we are talking about visual composition.
It’s no different when creating a comic book page, and that’s why I really appreciate artists who can do all the work, from art to the lettering and book logo. When you have all those elements in control you know the final result will be a beautiful and cohesive book.

As examples, I would mention Dave McKean and David Mazzucchelli.

– As you’ve mentioned, you’re an art director by trade. How do you balance work and personal projects? Are there times when it’s one or the other, or can you juggle both at once?

Art direction takes most of my day and some times nights as well, depending on deadlines that must be met. But I try to be very organized and disciplined, so most of my time during the year is a fine balance between the agency work and the drawing board at night with some sporadic exceptions.

The problem is that I can’t dedicate as much time as I’d love drawing comics at night. Two or three hours per night is not enough, and makes my production speed much slower than an artist that spends all day long exclusively working on comics. But I must admit that art direction feeds my comic work and vice-versa. In both cases we are talking about illustration, storytelling and new ideas.

– What, in the long term, is your goal as a comics creator?

I wish I could produce more, and to continue as an independent creator. I don’t really have any interest in playing with someone else’s characters. 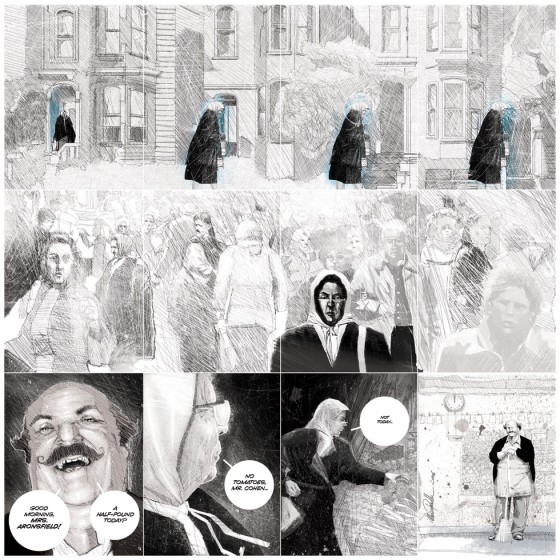 – What would you say to those wide-eyed youths who’re hopin’ to pursue art professionally? What advice can you give them?

Be focused and determined. Doing comics takes time and I know a lot of people who gave up creating new comic stories because that was taking too long or was too tiring. Discipline is important to keep you on track so you can finish your project.

Don’t let your drawings in the drawer. Show it. Put it on a blog, an on line portfolio, fanzine, etc. A drawing only accomplishes its goal when appreciated by the beholder.

Don’t let other people bring you down. When doing art that means you’ll expose yourself so expect to be criticized, but embrace feedback in a positive way so you can learn and improve your art.

Be your own worst critic. If you are not proud of your own work don’t expect others to love it.

Accept the fact that we are commercial artists. In a way or another we sell art whether in the form of a comic book, illustration, editorial charge, or an advertisement. Look for a potential audience that could buy your art. After all, in the end we all have bills to pay.

Have fun! If you are not having fun you should be doing something else.

– So what’s next on the agenda for Mauricio Pommella?

In the short term: I mentioned before, probably a series of new short stories. Some created in partnership with Juliana Azevedo, others not. I’d like to exercise my writing skills as well, so let’s see how that goes.

Mid-term: Juliana and I have been talking about TRANSMEET and how the story can be extended and we have several ideas on how that could evolve.

Long-term: Create and produce as much as I can.

– Anything else you’d like to share with the passengers of Spaceship OL? Information regarding a convention appearance? Perhaps a maxim that you live by? A dirty limerick your uncle told you back in `97? This is your spot to use as you see fit!

I’ll be participating at the Vancouver Comic Arts Festival – May 25 & 26, 2013. If you plan to be in Vancouver during those dates please come and say hi to a whole bunch of cool talents featuring their work at Yeletown’s Round House.

I believe photography is also a good exercise to explore new compositions, develop a better understanding on how to manipulate light and shadows so that ultimately will complement your illustration skills.

You can also check some of my instagrams here (http://instagram.com/mpommella).

Thanks for having me.