Megan Ganz leaves ‘COMMUNITY’ to write for ‘MODERN FAMILY’, and I gently weep. 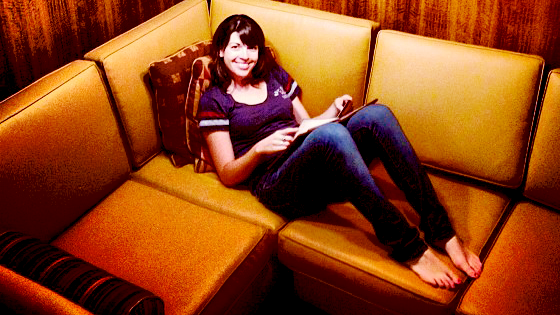 When Community creator Dan Harmon was sent to the Elysian Fields last Spring, a source of solace was the fact that writer Megan Ganz remained on the show. Such a salve can no longer be applied to our burnt chests, for the talented lady has departed the show for Modern We’re So Whacky. Alas. I want to be upset at this news, but I can’t help but feel that the cameras are never going to roll on Community again anyways. Fare thee well, Miss Ganza.

One of Community’s most notable and popular writers, Megan Ganz, has announced in a Reddit post that she’s taken a position at ABC’s Modern Family. While it’s sad to see her go, it’s hard to blame her for leaving when there is constantly a question aboutCommunity’s future. But at least we’ll get to see two more episodes in Season 4 that were written by Ganz, and she’ll be staying on to oversee the editing of those two episodes (“Paranormal Parentage” and the season finale, “Advanced Introduction to Finality”). Said the scribe:

We filmed the bottle episode in chronological order so this was the first line that we shot and I remember sitting at the monitors at 7am on the first day thinking, “If they call action and no one runs in here screaming ‘stop the TV-equivalent of presses,’ then I will have written a line that will appear on a television show. I’ll be a television writer.” And the director did call action–as they do–and so I was. Just like that. …

This isn’t the end of me and Greendale. Community was my world for four seasons and my job for three, and has hold of my whole heart like a bad-news high school boyfriend. I’ll never really get away. The chemistry is too perfect and the writing room couches aren’t really that uncomfortable to sleep on and I just can’t stop writing for Britta. Plus I still have to do my editing pass on the finale. I think I left a box in my office, too. Bobrow probably misses me. Better stop by on my way home.

Ganz’s voice on Community will definitely be missed, but I prefer to see her gainfully employed rather than suddenly silenced or underutilized. I will probably also really, truly have to start watching Modern Family now.

Tags: Community, it is all over now, megan ganz, modern family, turn off the lights