WEEKEND OPEN BAR: knock it off! 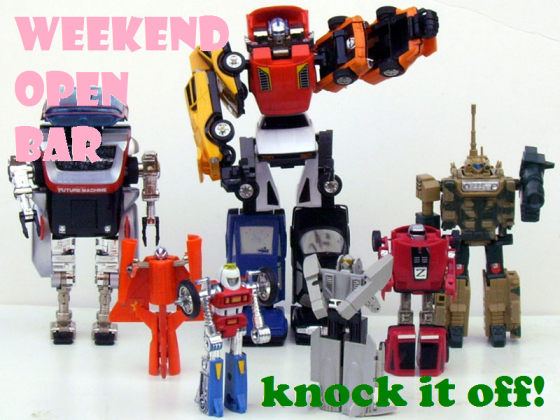 Mom and Dad are gone.  It’s just us.  Alone.  In the dark.  This can only mean one thing.  We have to throw a rager.  Grab the kegs and hide your sisters, it’s time to burn this mother down!

While Rendar and Caff are off to the frozen tundra of Narina or Canada, or where ever the hell they’ve gone, they’ve decided to leave their baby, OL, to us, the B-Squad.  God help us all.  It’s not all bad.  If things suck, they can scapegoat us, fire us, and have us killed for disobedience.  If things run great it’s a testament to their leadership skills and eye for talent.  Of course if we manage to shoulder the burden of entertainment for a mere 48 hours, then it proves that they are not irreplaceable and must then watch their backs.  Things have certainly taken a turn towards interesting.

So that leads us to this week’s open bar, hosted by me, your friendly neighborhood Dude.  You might know me from long winded Justified recaps that no one reads, or the crazy guy that likes stupid shit and makes you read it every Wednesday.  Yep, that’s me.  Today we’ll be talking about knockoffs.

Most people have heard of the Scifi channel.  Oh, I’m sorry, SyFy.  One of the things they like to do is buy up movies that closely mimic some of the larger movies that come out in a given year.  These are typically known as Mockbusters (or the term I prefer, Schlockbusters.)

Some of my favorites over the years have been Almighty Thor, Battle of Los Angeles, American Battleship, Snakes on a Train, The Day the Earth Stopped, and so on.  If you’ve never seen any of these, they are amazing.  It makes me wish for Mystery Science Theater 3000 to still be on the air (However Rifftrax are still pretty amazing).

So I ask you out there reading this.  What rip-off of an idea or product amuses you the most?

My vote for the best knockoff for sure goes to a cartoon show back when cartoons ruled the world.  I am of course talking about the Go-Bots.  Let me set the scene for some of you younger folks.  Back in “the day” we had one outlet for new cartoons.  Saturday mornings.  We didn’t have a DVR, there was no Netflix, and TV shows rarely were released on VHS.  There was no website to grab a torrent from, let alone an internet infrastructure that could even conceive of piracy in such a manner.  No.  All we had was the Saturday morning ritual.

Not only did we as children understand this, but the advertisers did as well.  They knew that millions of impressionable young children would be sitting down, eyes glued to a magic box that they could use to peddle their wares.  Parents would buy just about anything to shut their kids up.  This created a warzone for ad space.  Cartoon ratings were a window into our parent’s wallets.  Go-Bots became a problem for the Transformers.  Something had to be done.

And thus it was written.  In the early 90s Hasbro absorbed Tonka and the Go-Bot name.  Hasbro has done some 1984 shit with the license.  They occasionally put a Go-Bot into a Transformer comic/cartoon to be brutally murdered.  A subtle reminder of what happened to those that displease them.  It is also near impossible to get a hold of those old Go-Bot episodes.  Sure you can find Challenge of the Go-Bots (Ironically released in 1984) but where are the rest?  I’m sure Hasbro has deemed them ungood and are thus not to be spoken of.

Assuming I don’t get headbaged within minutes of posting this, I want to know your favorite knockoffs.  What amuses you about the length some people will go to tap into a piece of the action?