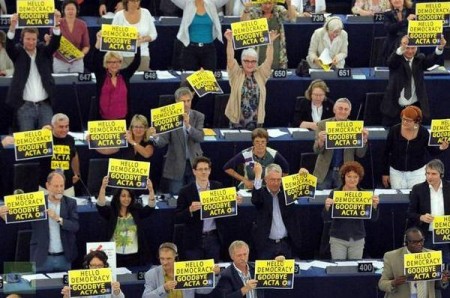 On Fuck Yeah! American Freedom (To Eat and Consume!) Day here in the States, our fellow humans over in the European Parliament have uppercut a dirty son of a bitch much to our internet folks’ pleasure.

On October 23, 2007, the U.S., E.U., Canada, and a handful of other countries announced plans to the negotiate the Anti-Counterfeiting Trade Agreement. The behind-the-scenes discussions had apparently been ongoing for several years, leading some countries to believe that a full agreement could be concluded within a year to coincide with the end of the Bush administration. Few paid much attention as the agreement itself was shrouded in secrecy. ACTA details slowly began to emerge, however, including revelations that lobby groups had been granted preferential access, the location of various meetings, and troubling details about the agreement itself.

This morning, the European Parliament voted overwhelmingly against the agreement, effectively killing ACTA within the EU. The vote was 478 against, 39 in favour, with 165 abstentions This is a remarkable development that was virtually unthinkable even a year ago. Much credit goes to the thousands of Europeans who spoke out against ACTA and to the Members of the European Parliament who withstood enormous political pressure to vote against the deal.

The European developments have had a ripple effect, with the recent Australian parliamentary committee recommendation to delay ACTA ratification and the mounting opposition around the world. ACTA is not yet dead – it may still eke out the necessary six ratifications in a year or two for it to take effect – but it is badly damaged and will seemingly never achieve the goals of its supporters as a model for other countries to adopt and to emerge as a new global standard for IP enforcement. That said, ACTA supporters will not take today’s decision as the final verdict. In the coming weeks and months, we can expect new efforts to revive the agreement within Europe and to find alternative means to implement its provisions. That suggests the fight will continue, but for today, it is worth celebrating how the seemingly impossible – stopping a one-sided, secretly negotiated global IP agreement – became possible.