Archives
« Rumor: Angelina Jolie To Direct ‘FIFTY SHADES OF GREY’; This Makes Too Much Sense
RC’s 12 Simple Rules to Follow for a Successful Interstellar Mission [spoilers for Prometheus] » 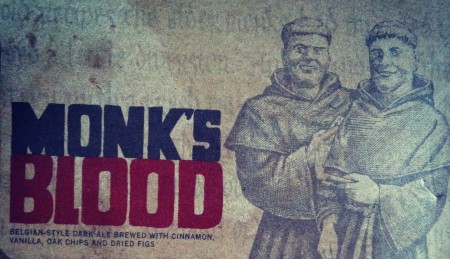 Dodging stray dogs and traffic and my own ineptitude, I ran through the streets in the rain.

I hadn’t felt that alive in a good long time. A month? A year? I’m not sure. But as I clutched the package and hopped over gasoline-streaked puddles, I felt an undeniable electricity dancing up and down my spine, reminding me that this is my one life and I’d damn well better appreciate it. So even though it was bright’n’sunny when I went into the liquor store, and I found myself sprinting with the ferocity of a Wally West fan-video so as safely transport my beers, I couldn’t help but smile.

Runnin’ through the rain on a Friday afternoon isn’t an inconvenience, it’s a goddamn privilege.

Safely within the confines of my apartment/spaceship (my therapist is tryin’ to help me come to terms with that one), I unloaded the cargo I’d guarded so closely. I didn’t want any of the wonderful acid-precipitation that we call weather to touch these containers, and in that mission I’d been wholly successful. Now, the next test revealed itself as I attempted to remedy faith with scientific experiment.

What the hell does any of this mean? Well, if I can decipher my own nonsense, it means that I’m going to try to quantitatively describe a sacred ritual. Science details religion?

So what is Monk’s Blood? Well, it’s a concoction from the folks at the 21st Amendment Brewery, which I’d never heard of before tonite. From what I can gather, this San Franciscan brewery was founded by Nico Freccia and Shaun O’Sullivan in the hopes of not only celebrating the brain-cell killing prowess of the 21st Amendment, but embodying said amendment’s spirit of liberty and innovation and personal possibility. Sure, James Gatz might’ve made a buck or two from Prohibition, but at the end of the day every human should have the right to sample tasty brews that murder inhibitions.

Legend has it that in the evenings, the monks would retire to their chambers & settle in with a few passages from the Good Book. But the Brothers Nico and O’Sullivan had other plans. Working in the brewhouse all day, they were forced to repeat the same old recipes the elder monks had invented years before. They needed a little diversion. And found it in the cellar of the monastery with a fresh twist that they put on the beer and the way they enjoyed it. in  the brewhouse all day, they were force to Brother Nicolas (or ‘Nico’ to his close friend) brought some hand-rolled cigars. O’Sullivan, the outspoken one, broke the vow of silence by spinning a remix of some Gregorian chants. Together, they’d throw don a couple nice hands of Texas Hold `Em and savor the handcrafted brew they created in secrecy. Everything was good. Or so it seemed. But deep in his heart, Nico knew they were drifting into the ‘dark side’ of beer. Next thing you know, they’d be skipping Lent. Then one night they’d face the Judgment for their actions with a hard knock at the door. Outside, the Abbot and elders would be holding stones in the air. A threat the brothers were sure would lead to the spilling of MONK’S BLOOD.

With such an epic backstory, there was no reservations in my soul keepin’ me from pourin’ a can into my gut.

After emptying twelve ounces into a standard beer-drankin’ glass, I took note of the visual splendor that is Monk’s Blood. This is a beer that settles as a rich shade of chestnut. Additionally, an off-white head crowned the top of the glass, creating a formidable bulwark sure to tickle the upper lip of any mustachioed beer-slingers. Holding the brew up to the light, I saw that nary a trace of a light was able to penetrate the alcoholic density.

Smell-wise, Monk’s Blood is a veritable tour-de-force. When I first shoved my nose into the beer’s stankhole, I was overwhelmed by hoppiness. However, the hops quickly subsided as the alcoholic vapors – no doubt a byproduct of the 8.3% ABV – launched a frontal assault on my olfactor. With that being said, subsequent sniffings picked up on breads and bakery-sugars and intimations of toasted malts.

Okay, time to drank up!

Monk’s Blood is not unlike a full-body rubdown (plus happy ending) for my palate. The flavor-experience was kicked off with some bitterness and oak-goodness, immediately reminding me that this is a brew, not a damn soda-pop. However, the more that I drank the more that I was able to pick up on the sweet vibrations. What sweetnesses did I taste? Well, the ones I can identify include vanilla and evil-invisible-cherry and dark-tart-monarch. This isn’t an ale that I can picture college freshmen tossing into their courage-funnels, but I can definitely see it being passed around by pretentious grad-students.

Lastly, Monk’s Blood is drinkable as hell. Even with a higher-than-average alcohol content, the liquid goes down smoothly. The light carbonation and creamy texture make for a deadly one-two punch. Truth be told, I’ve put away three of these bad boys in the course of writing this review, and I feel like I’m the king of the world (second Leo reference!).

So what’s my final verdict? Well, I might start to think about my spiritual affiliation with the American Transcendentalism movement, or the fact that at the day all members of team Humanity are of one blood. But I’m going to avoid such ramblings, even though chances’re good that those of you still reading would be (remotely) interested.

Anyways, Monk’s Blood is the real fucking deal. Rich, flavorful, illuminating. As such, it deserves nothing less: A- 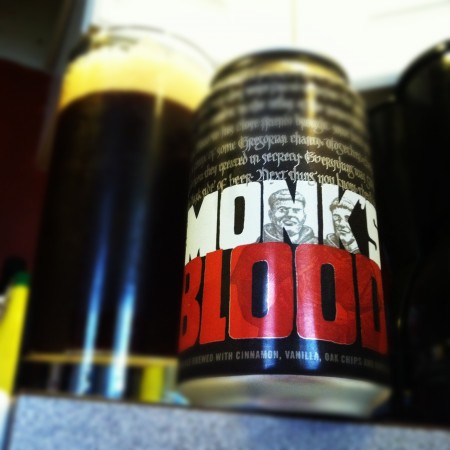