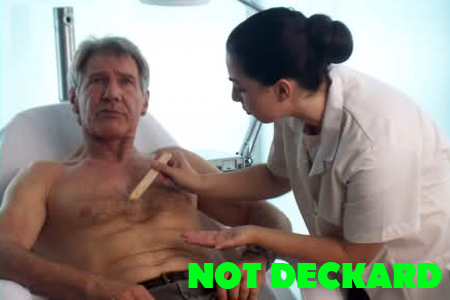 I was pretty cool with a Blade Runner  sequel happening, so long as it was telling a new tale in the glorious cyberpunkverse I had come to splooge on. I didn’t want no haggard ass Harry Ford and his dangling earring running through it. As my Dad used to say, “How does it feel to want?” Pretty shitty, pah. Maybe it won’t be as bad as it seems.

Speaking with  The Independent, Scott revealed his hope that Ford would appear in the  Blade Runner  follow-up, though probably not  in a central role. “I don’t think it’ll be Harry [starring],” Scott told the newspaper. “But I’ve got to have him in it somewhere. That’d be amusing.”

Scott’s statement is quite a ways away from a final confirmation; note that there’s no mention of any discussions with the star at this point. For fans of Ford’s conflicted hero from the first film, though, it’s an encouraging sign that Scott wants him back. Of course, even if Ford does sign on, there’s still the question of what form his reappearance will take. It might be a brief cameo or a supporting role, or perhaps he’ll be playing another character altogether.

Oh, aiight, aiight. Not starring. Fair enough. You had me worry, Rids. Had me worried.