Archives
« Lawsuit Reveals Infinity Ward’s West and Zampella’s Were Due A Cool $13 Million Bonus Each In 2010
Buy These F**king Comics! â€“ May 23, 2012: Forget The Dark Knight, Psychic Spies Know Your Naughty Thoughts » 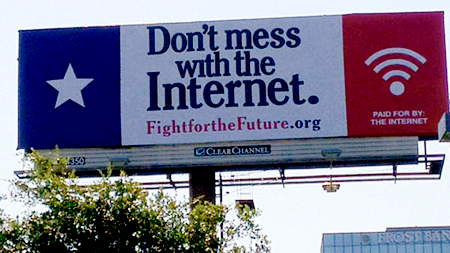 Check out this wunderkind. A crowd-funded billboard denouncing SOPA was placed right outside the office of one of the bill’s sponsors. Fantastic.

Holmes sez, “A crowd-funded, Texan-themed billboard for Lamar Smith (R-TX) is currently emblazoned across the Texas sky. The billboard says ‘Don’t Mess with the Internet’, and it just took flight this morning right outside the San Antonio offices of SOPA-sponsor Lamar Smith. The crowdfunding campaign went so well that in just two days in March we raised enough for two billboards, so there’s one in up in Austin too (on ‘Lamar Blvd’, appropriately enough). There’s even a t-shirt, available from Breadpig, Reddit co-founder’s philanthropic merch site. Proceeds support Fight for the Future and its latest project, the Internet Defense League.”

This is pretty awesome, and fitting. Awesome because it’s some quality real-life trolling. Fitting, since its a good example of the sort of collaborative mayhem that the Internet can promote.