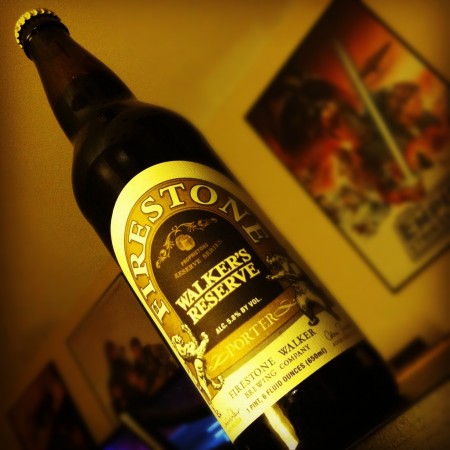 What’re you doin’ here? You’re lookin’ for beer reviews? Well, why don’t you hit up one of those aggregators that treat brewing as a time-honored art and present user comments with averaged scores? Oh, you’re not really interested in muddling up beer-drinking by quantifying it? I can appreciate that. Huh? You say that you’d put more stock in the opinions of a stark-raving lunatic? More than a well-informed opinion, you’re seeking a heartfelt knee-jerk response?

If that’s the case, I’d say you’re in the right place.

My name is Rendar Frankenstein. I am quasi-fictional, enthusiastic, and ready to drink beer. Fasten your seatbelt, return your tray table to the upright position, and prepare for the hyperspatial-jump.

Today, I’m going to detail my experience with Walker’s Reserve.

Before drinking, I decided to pound a couple of slices of bacon-cheeseburger pizza (leftovers from last nite’s Dionysian festival) and read up on the Firestone Walker Brewing Company.   After all, drinking shouldn’t be done on an empty stomach or an empty mind! So, what interesting tidbits did I learn about these Californian brewers? Well, I was fairly interested in the origin-story:

It began innocently enough: a couple of brothers-in-law sitting around debating the subject of good and bad beer. Instead, their search for a decent ale to led them to brew their own. Given Mr. Firestone’s winemaking bias and Mr. Walker’s complete lack of fermentation experience, they believed 60-gallon oak barrels were the appropriate vehicle in which to create their perfect elixir.

OK, so initial attempts were forgettable. But like so many great ideas, out of that disaster was born a handy invention — the Firestone Union. Based on classic brewing traditions from Burton-Upon Trent, this bizarre and unlikely system of linked barrels has the ability to produce rich and complex ales. In 1996 the accidental duo shelved their endless discussion on better beers and settled for building a world-class brewery that bore their names on California’s Central Coast……the debate was now over.

Brothers-in-law who make beer together? Cool way to keep it in the family, I guess. Hell, brewing together might help reduce the number of weird family feuds and bring folks together in unimaginable ways. But is their beer any good? That’s what I wanted to find out.

Rather than run the Firestone Walker gamut, I decided to pick up a bottle of Walker’s Reserve, which is touted as the beer-makers’ proudest offering. In their words:

Pouring the porter into a standard drinking glass, I conducted a routine ocular assessment. As is to be expected of a porter, the liquid settled as a hue somewhere in the region of dark-brown/light-black, intimating a shade of red here and there. The dense head began as a tan, but dissipated and chameleon-shifted into more of a turned-creme. This brew isn’t the most gorgeous I’ve seen, but is still far from an eye-sore.

Smell-wise,  I was able to find notes of roast and warmth and light-fruit, but I wish they’d been more easily detectable. In fact, I found myself nosediving in an attempt to investigate the aroma. Overall, I’d say Walker’s Reserve had a pleasant but slightly underwhelming bouquet.

At this point, it was time to get drankin’!

I grabbed the glass and tossed back a mouthful of the porter. Then another. Then yet another. After drinking an entire glass, I was stupefied. Wasn’t there supposed to be some sort of grand epiphany at the bottom of my glass? That’s what I assumed after reading the product’s description, which had proclaimed Walker’s Reserve to be not only distinctive but also the company’s finest brewing efforts. Having tasted (and ranted about) countless beers in my day, I’d like to think that I know an Earth-shaking beer when I taste one.

Unfortunately, this ain’t one.

After drinking the entire bottle, I can say that Walker’s Reserve is a solid porter, providing a fun romp into the entrance of the Dark Beer Woods. If you venture upon this path, you may meet the Coffee-Creature, Roast-Robin, Bitter-Balrog, and tiny Hop-Hog that evade the Macrobrew Highway. And for that, I will say that the folks at Firestone Walker have crafted something worthwhile. But if you’re the type of beer-drinker that’s waged war with Imperial Ambassadors, walking away unscathed save for a scar and a story, then this may not be the ideal choice for you.

This beer brings together families, gives twenty-something nerds Saturday-buzzes, and tastes pretty good. The verdict: B-