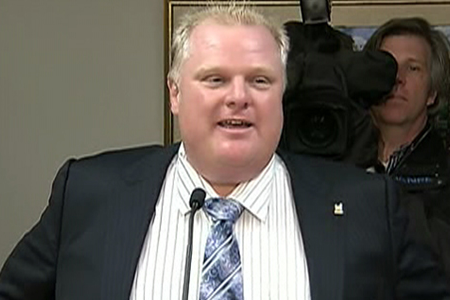 Now you can narc people out with wonderful high-tech. Yes, you! Well, provided you live in Toronto. Thanks to an impressively douchey application released by Toronto’s mayor, you can report any sort of graffiti you come across.

Toronto’s mayor Rob Ford is a kind of idiot-non-savant, a dunce and thug who rode to power by promising that he’d “end the gravy-train” of municipal spending and ended up chasing pissant causes like graffiti removal (he’s going to charge small businesses to remove the graffiti on their walls, even if the graffiti in question is a beautiful mural that everyone, including the business-owner, approves of), tickets for bicycles that lock up to things other than official (and hens-teeth-scarce) bike-locks, and expensive vanity projects like removing brand-new bike-lanes; and barbarian red-meat politics like shutting down libraries in already underserved areas.

Releasing a $2 app to complain about graffiti is pretty much perfect Rob Ford — the only thing that could make it more Fordian is if it made fart noises.

“This is as efficient as it gets,” remarked Ford at press conference earlier today. “This will make it easier than ever to report graffiti vandalism and help keep the city spotless.

Standing in front of local residents busily painting over tags on garage doors, Ford pointed to a bridge on Scarlett Road near Lambton Golf Club as a clean-up success story he hopes to replicate across the city. “Once people know we mean business, the people that are causing this mess are going to learn a tough lesson,” he declared.

The app, which costs $1.99 (and is currently only available for iPhone), lets Apple smartphone users send photographs directly to the city with a request to remove of the offending material. If the property owner fails to clean up the tag, the city will – so they say – step in and bill the owner for the work.

I have a feeling most of the people with  an iPhone aren’t the like commonly inclined to report street art. I could be wrong.