Archives
« Cosplay: Link and Epona Totally (Hy)rule! Get It? I Hate Myself.
Terrorist Claims BATMAN Inspired Him To Act. Frank Miller Broods » 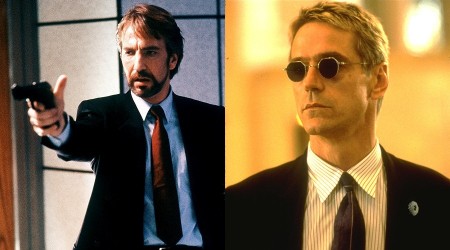 The original Die Hard sees John McClane’s attempt to win back his wife being convoluted by the takeover of Nakatomi Plaza by a terrorist group. This faction is led by Hans Gruber (Alan Rickman), a smarmy dickhead who operates under the pretense of making the Nakatomi Corporation atone for its inordinate greed. However, we quickly realize that Hans Gruber isn’t waging a ideological war, but just wants to pilfer millions of dollars from the corporation!

Hans nearly succeeds because he’s not just a dolt trying to rob a bank – he’s crafty as hell. In addition to having a swarm of henchmen at his disposal, he also keeps his eyes peeled to the television coverage of the hostage situation he’s created and maintains a walkie-talkie repartee with McClane. Hell, he even makes good use of the `ole “Use the hero’s love interest against him” trick. When one considers that Hans creates a near-invulnerable position for himself by implementing the obstacles within the confines the Nakatomi tower, it’s hard not to see a sort of maniac-genius quality.

So even though the movie’s end sees Hans dying – and it is a glorious, cinematic free fall of a demise – there’s no denyin’ that he ran the protagonist through the ringer (and probably gave him PTSD).

Seven years later, the trilogy would be completed with the release of Die Hard with a Vengeance. In this bookend, John McClane is a boozehound and general miscreant who’s been suspended from the NYC PD. McClane is reactivated so as to placate a terrorist (Jeremy Irons) who wants to play a deranged game of Simon Says. Not unlike Hans Gruber in the first film, this “Simon” character enjoys speaking to McClane over the phone rather than immediately meeting him in person, thus building a suspense for the inevitable confrontation.   The tension builds especially well because even though Jeremy Irons is kept off-screen for much of the flick, his voice cuts through heartstrings. But before the eye-to-eye showdown can occur, McClane (and Zeus!) have to solve a bunch of riddles or else a school will be blown up.

Well, we find out that Simon is actually Simon Peter Gruber, brother of Hans Gruber. Needless to say, Simon is hoping to exact some revenge on the man who claimed his brother’s life. But just like his brother, Simon’s motivations are not wholly philosophical – in addition to making McClane’s life a living hell, this second Gruber is aiming to steal a whole heap of gold from the Federal Reserve.

Before all is said and done, McClane is brutalized but manages to murder the villain of the day. While perhaps not as artful as his brother’s death, Simon Gruber’s end is pretty damn exciting. Just remember – be careful in helicopters.

So whattaya think? Who’s the better villain? Which of these total bros beats McClane’s fanny harder?