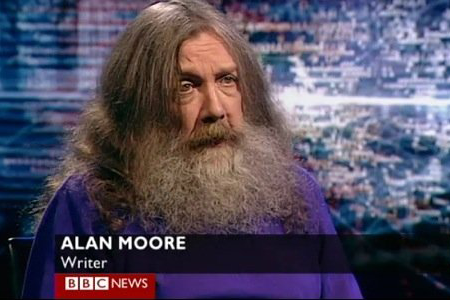 Alan Moore is back at it. I know that some people (specifically around these parts, and people I respect mind you) are tired of him lobbing bombs, but I enjoy it. In this interview, Moore details how Gibbons and he got jobbed when it came to the rights to Watchmen  and more.

Describing himself as “less than delighted” at DC’s decision to release eight new series that take place before Moore and Dave Gibbons’ classic 1986 superhero series, Moore explained how the publisher ended up owning the characters in the first place:

This is something where originally we were told that we could embark upon Watchmen because they knew that we wanted to own our own stuff and they had a contract that would enable us to have the rights back when they went out of print. Now back at that time there was no such thing as a comic that had remained in print for more than six months so we signed these contracts, obviously without reading them very carefully because we trusted these people, then we found out… that DC Comics would own all this stuff forever.

As he went on to explain, however, this shouldn’t have come as a surprise considering the history of the American comic book industry:

You have to remember that the comics industry was set up in the 1920s by Legs Diamond, Meyer Lansky, it was set up as a cover for bootlegging… I’m talking about the original gangsters, as I believe the young people like to phrase it these days, the Meyer Lanskys and the Legs Diamonds. The ethics of the comics industry have not changed since those days when they were cheating Jerry Siegel and Joe Schuster, who were two teenagers from Cleveland, who had created Superman, and National Comics…they waited until Siegel and Shuster were going off to fight in the Second World War. And then they told them that “we need to own the characters while you’re away, but you’ll get them back as soon as you return.” These are the ethics that the industry runs on, they’ve not changed significantly in 70 years.