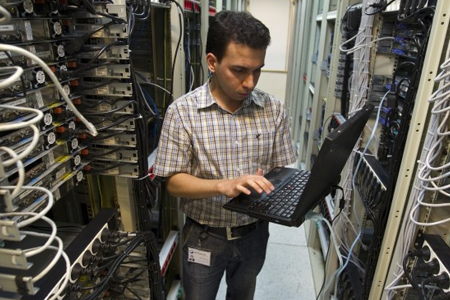 Iran totally, totally  isn’t going to cut off their peoples from the Internet in lieu of a national intranet. Totally. They’re not winking.

There’s an  AFP item today  on Iran’s denial of online reports that it plans to shut off access to the Internet this August, replacing that access with a “national intranet.” Snip:

The reports derived from a supposed interview with Communications Minister Reza Taghipour published on April 1 that was in fact a hoax, the ministry said in the statement on its own site www.ict.gov.ir — which itself was not accessible outside of Iran. “The report is in no way confirmed by the ministry” and is “completely baseless,” the ministry statement said.

The hoax report quoted Taghipour saying that Iran would from August launch a “clean internet” that would block popular services like Google and Hotmail and replace them with government-sponsored search engines and e-mail services. The ministry statement slammed the false report as serving “the propaganda wing of the West and providing its hostile media with a pretext emanating from a baseless claim.”

They’re totally not going to do it! Promise.