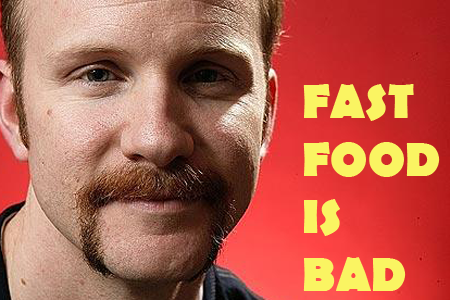 You may know Morgan Spurlock from getting fat as fuck in Super Size Me  to prove that McDonald’s wasn’t good for you. Incisive. (Actually a lot of it was about how the corporate take-over of our schools is making the little ones into fat fuckers but that’s often ignored.) He’s put out a cadre of other documentaries, with his latest one  Comic Con Episode IV: A Fan’s Hope dropping this weekend. (I watched it. It just made me want to go to Comic Con with a burning dong glow.) Now after so many documentaries, the good sir is ready to get his narrative on.

Director Morgan Spurlock is best known for his documentary films, and even his television shows are all reality based. Since hitting the scene in 2004 with the Oscar-nominated Super Size Me, Spurlock has made a ton of movies and TV shows but has yet to tackle narrative fiction. Earlier this year, the director revealed he was attached to his first film of that kind, something he described as “very Erin Brockovich-ish.” In a new interview I conducted with Spurlock on the occasion of Comic Con Episode IV: A Fan’s Hope, he offered an update on that project.

Spurlock confirmed the script was currently being tightened, two major actors are attached and he’ll likely shoot it this summer.

Here’s what Spurlock said when I asked him to update me on the film:

It’s financed. We’ve closed on the financing on the film. We’re doing a rewrite on the script now to close in on cast. We’ve already got a really great actor attached to play the lead. I’m not going to tell you who it is. We’ve got a great actor attached to play his dad, which is even more exciting. As soon as we get the rewrite done and can lock into a schedule we’ll make a bigger announcement but that’s happening. It’ll probably be this summer.