Archives
« ALAN MOORE On The Fans Who Will Buy ‘BEFORE WATCHMEN’ ILU, Alan.
COMICS WE’RE BUYING THIS WEEK: Crabapples, Breast-Feeding, and Aliens. We Have Win! » 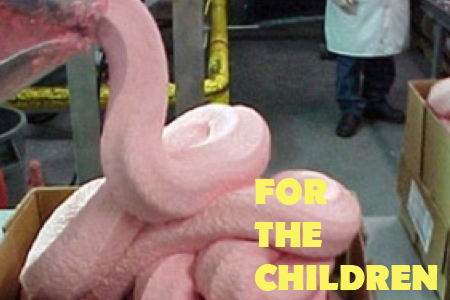 I have to say, we set our kids up to succeed these days. Cutting school budgets, mindless burecracy preventing the evolution of the educational system and now this: about as close to poisoning the little fuckers as you can get.

Remember our old friend pink goop? The crap notoriously in chicken nuggets and the filth that McDonald’s famously stopped using a month ago? Well, it’s rearing its ugly pink head again and this time it’s going after children. That’s right, the USDA has plans to buy 7 million pounds of pink goop beef for our national school lunch program

Lean Beef Trimmings from BPI, as it’s officially known, or pink slime, as it has become notorious to be, is actually made of of “beef trimmings” which are the undesirable, leftover crap of a cow that’s better fit for dog food than human food. Taking it one step further, the beef trimmings are then processed and soaked in ammonia hydroxide and churned into ground beef. Carl Custer, a 35-year veteran of Food Safety Inspection Service, told The Daily:

“We originally called it soylent pink. We looked at the product and we objected to it because it used connective tissues instead of muscle. It was simply not nutritionally equivalent [to ground beef]. My main objection was that it was not meat.”

Even with all that, the USDA still plans to buy 7 million pounds of the pink goop beef for use in school lunches. Even with McDonald’s, Burger King, Taco Bell–places most parents wouldn’t want their kids to eat regularly–rejecting pink goop beef, the government is still okay with feeding kids that stuff on a regular basis. Way to set an example, guys.