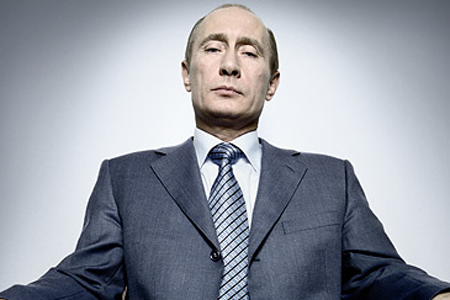 Vladimir Putin isn’t fucking around. You can tell that the Lord Emperor of Russian (and tiger kung-fu dominator) takes the USSR’s loss of the Cold War with a particularly chaffed ass. That leads him to dropping little nougats every once in a while about Russian rockitude. Take for example, the microwave zombie gun.

Even though Russia and the US are no longer engaged in a cold war, Russia still likes to engage in a little military one upsmanship every now and again, even if some of their claims are total bullshit. Like when Russian president/Cobra Commander Vladimir Putin recently claimed that Russia has a microwave radiation gun that can turn people into mind controlled zombies. Orly?

Precise details have not been revealed but previous research has shown that low-frequency waves or beams can affect brain cells, alter psychological states and make it possible to transmit suggestions and commands directly into someone’s thoughts.

The weapons tech also causes a powerful burning sensation comparable to the microwave pain rays we use here in the US. But do our pain rays also cause mind control? No! And what’s more dangerous than a throng of dissidents writhing in pain and willing to do anything for Mother Russia? Nothing! Red zombie hordes. The Herald Sun claims “Mr Putin said the technology is comparable in effect to nuclear weapons but ‘more acceptable in terms of political and military ideology.’” Putin, ever the olive branch pruner–what could be unpalatable about brainwashing pain rays?

How can something be comparable to nuclear weapons, but more acceptable in terms of military ideology? You’re free to ask, but prepare to fucking die.