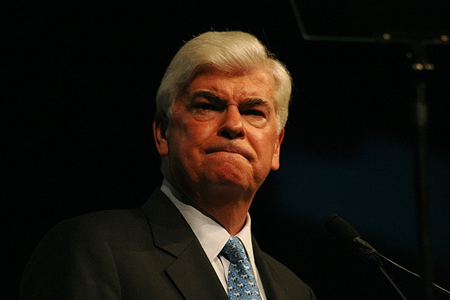 The MPAA isn’t taking the death of SOPA laying down. They’re doubling-down and coming up with something nefarious to emerge in its place.

Former Senator Chris Dodd, head of the MPAA, has hinted to the Hollywood Reporter that he’s already greasing the wheels for a new version of SOPA, though he’s shy about revealing details because of the public outcry that might ensue. Dodd is the guy who went on the record to tell Obama that he would instruct his members to stop donating to the Democratic party because Obama didn’t usher in the laws they wanted.

DemandProgress has whomped up a petition asking Obama to end the practice of writing American copyright laws in smoke-filled back rooms.

THR: Are there conversations going on now?

Dodd: I’m confident that’s the case, but I’m not going to go into more detail because obviously if I do, it becomes counterproductive.

THR: Did you feel personally blindsided by Obama over SOPA?

Dodd: I’m not going to revisit the events of last winter. I’ll only say to you that I’m confident he’s using his good relationships in both communities to do exactly what you and I have been talking about.

I hope it was obvious to most that when SOPA went down in flames the Corporo-Machinery that had generated it wasn’t going to go quietly into the night. Instead they were going to recede into the darkness and begin plotting anew. We shall see the Beast’s head again.