Welcome to Friday’s (no longer Thursday, because I apparently can’t get my shit together on Thursdays) most ridiculous column, Cinematic Polyamory, which — for those of you playing the home game — basically amounts to an ongoing list of the famous people I want to bang.

Last week, I opened with my two number one celeb spouses: Emma Thompson and Steven Spielberg. Today’s lucky duo have been on the list since 2005; celeb hubby #2 has been fixed at numero duo ever since I clapped eyes on him, while celeb wife #2 took about a year to get to her current spot. Never the less, they remain two of the most powerful actors today and someday I will be married to one or both of them. Because I have goals. And I always accomplish my goals. Just give me a pack of Orbit Wintermint gum, a pair of scissors, some lube, and a duck mask, and I’ll have what I want within an hour or so.

Terrified? You damn well should be.

As that Kabuki-looking chick from The Hunger Games says: ladies first. 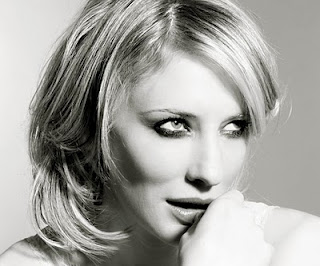 Ah, Cate. The first time I saw you, you were  stealing the show as the Middle Earth answer to “is anyone perfect?”    and then ruling shit as Elizabeth and then being terrorized by Dame Judi Dench in Notes on a Scandal. There is no movie you cannot class up; there is no role you can’t own; there is no way you are even human because those lips, those eyes,  those fucking cheekbones. Cate, how the serious fuck are you even real? You’re like some beautiful statue Michelangelo carved (well, maybe not Michelangelo, because he was gayer than a bucket of butterflies and all his women looked like dudes with ice cream scoop tits), or every lesbian fantasy I’ve ever had come to life with English rose skin.

The thing about Cate is that she’s a total chameleon when it comes to playing a part. She slips from one character to another and plays each as if they were actually her. She makes acting look so easy. Remember when you first saw Fellowship of the Ring  and Galadriel came down those stairs and you were like, “SHE IS A REAL ELF JESUS FUCKING CHRIST WHERE AM I”? That’s what she’s like in every  movie. You are completely sold on her character. It is the mark of a truly gifted actress to not show a single crack in the facade.

Also, those long legs. I would part those legs and do filthy, filthy things to her. 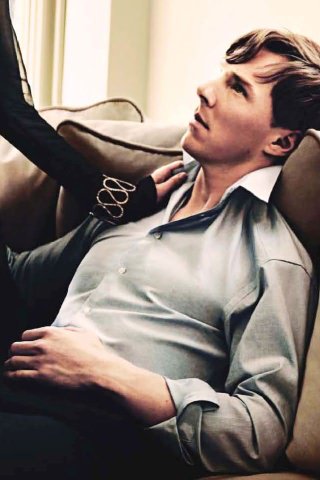 Okay, before I’m accused of jumping on the bandwagon by all the rabid Sherlock fans, let me just say one thing:  there was life before Sherlock. Is it a fabulous show? Yes. Is Benedict’s Sherlock a tour de force performance? Yes. However, Benedict isn’t Sherlock. Or at least when I look at him (or think of him while lying in bed or when looking at sturdy flat surfaces), I don’t see Sherlock. I see the first person I ever saw him play: Stephen fucking Hawking.

Once upon a time, I was a senior in high school and my science teacher said she got her hands on a BBC movie while she was visiting family in England and would I like to watch it? It was about Stephen Hawking, aptly named Hawking, and was quite good. So naturally I was on that DVD like shit on Velcro, brought it home, grabbed my best friend and forced her to watch it with me. Halfway through the movie, I turned to her and said, “I just want to make it known that I will someday write that fucker an Oscar-winning movie.”

I can’t tell you what I was feeling while watching Hawking, because I think I blacked out at some point from the sheer talent, but I do remember feeling awe. Sheer awe that someone could give such a raw, genuine, believable performance. I watched that fucking thing until my computer was like, “Please stop doing this to me and watch a Region 1 DVD for a fucking change.” I was eventually forced to give the DVD back and Benedict kind of dropped from my radar until 2007’s Atonement, where he played a very suave child rapist. I saw it in theaters and was overjoyed to see him again, even turning to my friends to say, “I would let him do any rapey thing to me he wanted.” And my friends were like, “I don’t think that’s what the film wants you to take from this, R.C.”

I’ve kept up with his career ever since — including all his radio plays and shows (everyone should go YouTube “Cabin Pressure”… be prepared to laugh your tits off), and am eagerly awaiting his latest roles as Smaug (The Hobbit) and the unknown villain (Star Trek 2). Lately I’ve found myself quite grateful to BBC’s Sherlock. Before  Sherlock  premiered, no one knew who the fuck I was talking about when I mentioned his name.    Now? He’s everywhere, and he fucking deserves to be. Much like Cate, he has the ability to simply lose himself in every role, making each performance the greatest thing you’ve ever seen. I’ll be seeing him in June playing the Creature in Danny Boyle’s Frankenstein. I’ll be camped outside the theater for a week prior to opening night.

Surprisingly enough, yes, while I would allow him to do the most depraved things to me, my fondest dreams involve us stargazing and doing little else. Someday, Benedict, you’re gonna be on the stage at the Kodak, accepting the award for Best Actor for the film I wrote for you. Better start planning your speech, sweet cheeks. Your time is coming.