Archives
« Female Writer For BioWare Has Pissed Off Legions Of Douches.
New Pics From ‘The Avengers’ Feature Total Doofus Mode, and CASUAL FLEXING. »

Todd McFarlene: They Only Sue When There’s Money, Me: LOL Mark McGuire. 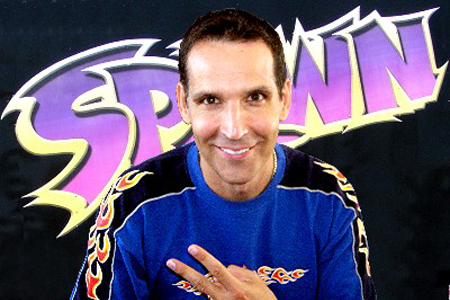 Todd McFarlane wrapped up a length legal battle last year with Neil Gaiman, and now he’s parlaying those sour grapes into comic books commentary. If you haven’t heard, Robert ‘Walking Dead Was A Good Comic I Promise’  Kirkman is getting sued by Tony Moore who worked on the rag with him. McFarlene decided to make public some eggs of knowledge he cracked over Kirkman.

“I just went, Robert, what you’re about to get involved in is a pain in the ass, take it from me. But there is a silver lining in that you’re doing something that matters. Because nobody ever sues anybody over something that doesn’t matter. So, you know, if your book was selling four copies, it wouldn’t matter what agreement everybody thinks they have. Nobody cares. They only sue when there’s money on the table. There’s money on the table because you’re doing something successful. You have to get a thick skin, and in a weird way, if people keep coming at you, and lawyers keep coming at you, that means you’re doing something successful, that you’re enough of a target for them.”

It’s a fair, fair point. Ostensibly, no one is going to take a run at someone who can’t give them a payout. That said, it doesn’t mean that if you’re affluent and getting sued you haven’t done something wrong.