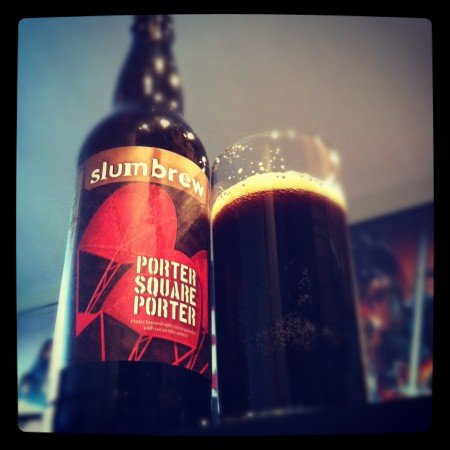 Before today’s trip to the package store, I’d never even heard of Slumbrew. But as a resident of the Boston area, I was intrigued by the label’s allusion to Porter Square. I immediately snatched up the 22 ounce bottle and decided that I’d hit up the brewery’s website upon arriving home.

Here’s what I found:

Slumbrew is all about the synergy between craft products and every day consumption. Well conceived, locally-sourced, quality products should be an every day part of our lives — not a unique occurrence. This is the spirit of Slumbrew. Slumbrew is the research & development brand and concept of Somerville Brewing Company. Our mission is to brew unique, ingredient-driven beers that challenge common notions of what a beer should taste like. It is the result of nearly 15 years of beer travel and research by Caitlin Jewell and Jeff Leiter; and a decade of Jeff’s homebrewing recipe formulation.

From what I can infer, Slumbrew seems like a small operation outfitted with people that actually care about the beer craft. I like that. Hell, I could be wrong, and maybe Slumbrew is just an attempt to wheedle away shekels from hard-working dingbats in exchange for inebriation. I’ve fallen for such ploys before.

A solid trailer overpowers me, planting my rube-ass into a theater seat for even the most inane movies imaginable.

Remembering this, I proceeded towards Porter Square Porter with caution. I first poured the beer into a standard drinking glass for visual inspection. This porter is blacker than Venom, with no other hues appearing even when the liquid is held up to the light. The beer is also crowned by a tan head which frothed up quite nicely.

In terms of bouquet, Porter Square Porter is quiet appealing. At first, I was going to describe the porter’s scent as being similar to hot cocoa with a dash of coffee. Then, I thought it’s more black coffee with a dash of cocoa. In either case, the aroma sees a wonderful melding of bitter and sweet, not unlike the inside of an espresso bar at midday. For anyone who’s graduate from the world of lite beers and soda-pop, this brew is sure to smell fantastic..

Okay, now on to the drankin’!

Porter Square Porter used a variety of techniques to massage my taste buds. First, the roasted notes danced about, easing tension along the way. From out of nowhere, a light floral quality appeared, albeit for a mere moment, reminding me of some of the more pretentious cups of coffee I’ve drank in my day. That’s a good thing. There was most certainly a chocolate presence in the bottle, but it didn’t feel the need to vie for attention. This, too, is a good thing.

When all of these flavors, rich and dark and sweet and macabre, combined with a relatively light mouthful, I knew immediately that Porter Square Porter is a party brew. I can definitely see a six-pack of this concoction being devoured by the party-monster, the multi-limbed beast of revelry that appears when free hooch is provided but never goes out of its way to try new things.

This is a concoction that can be consumed by both those initiated and uninitiated to the ways of the dark brew!

So now that I’ve consumed the full bottle of Porter Square Porter, what’re my thoughts? Well, my eyes, nose, and mouth have been stimulated and my brain is having a hard time fending off the alcoho-poison. This porter is an ideal beverage for admirers of dark beers, coffee, or anyone who’s tired of light-beer nonsense. While I’d say that Slumbrew’s craft is dense in terms of flavor, I’d be a liar to say that it’s the heaviest beer I’ve ever poured into my gut.

Slumbrew has proven that there are new voices rising, hoping to be heard over the the amplified caterwaul of Sam Adams. Boston has more than one beer company. And it just might have a new one worth mentioning.

Porter Square Porter gets the grade it deserves: B+