Archives
« Press Start!: The Year Spectacle Gaming Died For Me
THE GANG OMEGA’S PICKS OF THE F**KING YEAR: The Faux Bot »

THE GANG OMEGA’S PICKS OF THE F**KING YEAR: Budrickton 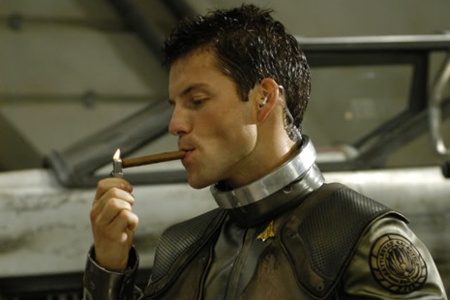 (It’s been a fruitful fucking year for us here at OL. There’s been ups and downs, but one of the most fistfully-forceful awesome happenings was a swelling of the contributors. We decided what a better way to celebrate this than to get all of us to spout off our favorite things of the year.)

Movie: Mission: Impossible: Ghost Protocol.
The stunning thrill of IMAX cinematography with some of the better action sequences I’ve ever seen in a Hollywood flick. Beat out First Class for me (aside from Fassbender now permanently owning the key to my Assbender, the film strangely didn’t resonate with me for long — a total mystery to me; mutants usually get me moist at a mere mention).

TV Show: Game of Thrones.
HBO + Fantasy that isn’t True Blood? Yes please. Very tight drama seething with all the right boxes checked: politics, suspense and intrigue. I have a particular love of family drama and stories that explore the definition of family, by blood or otherwise, and Martin handles a lot of that deftly; a wonderful spring surprise, and a very accurate adaptation.

Album: N/A…Sort Of.
I think the last time I consumed music by the album was 1998, in Junior High School. All I know is, I heard a lot of Rihanna on the radio this year, and I was usually happy about it.

Comic: N/A
I didn’t read a thing this year, but I guess I have to hand it to DC for attempting the most radical move I think they’ve ever made, and actually succeeding at it…?

Video Game: Marvel vs. Capcom 3: Fate of Two Worlds.
Talk about dream games that people never thought would actually happen. What a thrill to see and feel come alive onscreen. I’m hardly a competitive fighting game player (frame interrupts, super cancels and all that other garbage? No thanks), and I still love the shit out of this explosive title. Honorable mentions to Portal 2 (a strong single-player campaign marred by loading times and a bunch of boring missteps) and all the winter big-hitters that I’ve barely begun to play.

Food: Cheese.
After sticking to cheddar, swiss and the rest of the usuals for most of my life, I branched out and tried a ton of others this year, and damn if there aren’t some eccentric and delicious marvels out there! Being taught the fine-art of food combining by my culinary betters was a highlight this year too. I was handed some kind of fig spread, a small glass of icewine and a mystery cheese with some Eastern European name. I don’t have a memory of the following ten seconds; all I know is, the food and drink were gone and I was high on the orgy of flavor rolling across my tongue.

Drink: Liquid Cocaine.
I let all manner of friends introduce different drinks and shots to me this year, and this has to be my favorite. Sweet and delicious shot. Also, practically anything from Starbucks. Devilish company has completely wormed its way into my heart and wallet.

Wild Card: The Kinect.
How in the world did this become a highlight of the year for me? Between the completely entrancing Child of Eden, and the drunken horseplay that was had among my buddies and I with Kinect Adventures and Dance Central, I’m convinced this tech actually belongs in my living room. Sure it could be leagues better, but what’s here isn’t anything to scoff at.

Eagerly awaitin’:
Bioshock Infinite. Game of Thrones, Season 2. The Dark Knight Rises. The Avengers written and directed by my boy, Joss. I don’t even know how to decide. They’re all going to tickle my balls in very different ways.

Desperately hopin for:
The resurgence of Square-Enix. Take the easy-money route and remake VII, or show off a brand new Final Fantasy XV that returns the franchise, and the company, to its first class glory.