Archives
« THE ADVENTURES OF TINTIN Is the Spielberg Movie You’ve Been Waiting For
Desktop Thursdays: Toppled Christmas Trees and Final Papers. » 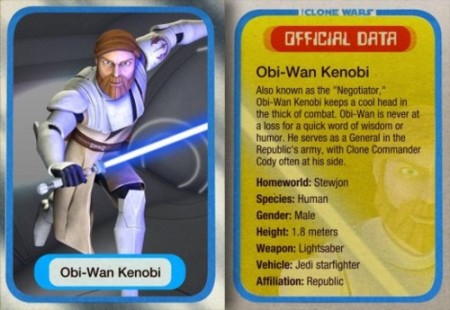 At the Star Wars Celebration V this year, Jon Stewart asked George Lucas where Obi Wan Kenobi was born, and apparently this had never been established. So as a joke, Lucas just made up a planet called “Stewjon”, named after Jon Stewart as the place of Obi Wan’s birth. But since it came from the neck of Lucas, it’s since become canon, appearing everywhere as fictional fact.

And so there it is… “Stewjon” is now officially the home planet of Obi Wan. It’s on toys, Wikipedia, Star Wars wikis, official websites and everything.

It’s not like there hasn’t been anything named arbitrarily before in the Star Wars canon, but still man. Fuck. George Lucas.