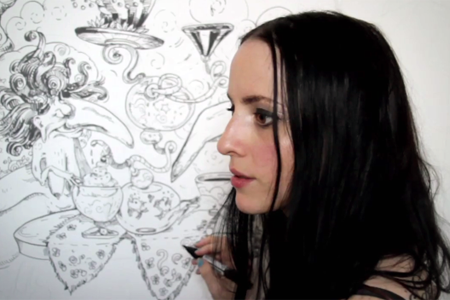 I first heard about Molly Crabapple through the website of my Lord and Demonic Inspiration, Warren Ellis. I’ve followed her a few years on Twitter, and always thought she was pretty fantastic. However, the shit she pulled off this year is nothing short of fantastic. To celebrate her 28th birthday, she locked herself in a hotel room for a week. Covered the walls in paper. And drew. And drew. It was financed by a Kickstarter project whose requested backing was crushed, and this video was produced out of it.

Pretty tremendous stuff, the sort of thing that is simultaneously inspiration and depressing. “Man, this makes me want to create!” followed by “Caff, you lazy useless sack of shit.”