THIS WEEK ON Walking Dead: Pretty Much Dead Already 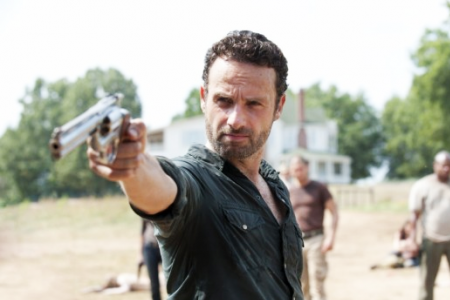 Here it is folks, the mid-season finale of the Walking Dead.   We start out with Glenn’s trademark speech craft ability.   Glenn announces that the barn is full of walkers.   This of course causes a panic amongst the survivors.   This revelation presents a few problems for everyone.   For Rick it means that he has a new complication with Hershel.     For Glenn, it’s the betrayal of Maggie’s trust.   For Shane, this is a security threat.   The lion’s share of this episode is going to be focusing how everyone handles this new development.   I love how the opening ended with a throwback shot of the barn door bulging slightly as Shane got near.   Reminded me of the hospital shot during season 1.

It seems like Carl is starting to adjust to his surroundings.   He’s more assertive than a child would normally be when surrounded by adults.   He understands that the world is changing.   For this group to work with a democratic outlook, everyone’s voice is needed, even that of a child’s.   I liked this scene not for the banter between Carl and his mother, but for the shear fact that he was doing math problems.   Sure, it may have been just an excuse to have them talking, but its little details like that that make me believe in the world they are presenting.

I have no fucking clue what’s going on with Daryl.   The scene with Carol in the stables is confusing.   Since Daryl is a new character I like him because he provides me with something no one else does — surprise.   I have no frame of reference outside of the show to draw on to predict his actions.   I think this is where the writers also fail a bit. Since he’s their own creation, he’s can go in any direction.  In season one, he spent most of his time being angry and kicking ass.   Hell, he started off season two strong in this department too.   Now it seems like the writers are trying to humanize him, but they still want him to keep his edge.   I understand that they need to calm him down to make Shane the unpredictable hot head, but its really hurting the character they presented to me at the start.

I feel bad for Dale for most of the episode.   He fights an uphill battle with nearly everyone.   First he just wants Andrea to know that Shane is not a good person to put your trust in.   Sure, he may have the tools to survive; a good gun hand and a six pack that even zeds can’t bite through, but what he doesn’t have is a soul.   Dale notices that Shane is going off the deep end, and he wants to make sure that Andrea isn’t dragged over the side too.

Dale does get a small victory when he cleverly tricks the guileless Asian guy.   Dale thinks that Shane might do something rash that would cause Hershel to accelerate the group’s exodus from the farm.   By taking the guns, perhaps he can mitigate the damage he can do.   For the most part, Dale is right.   If Shane does something out of line, it hurts Rick’s position as leader as it shows he can’t handle his people.

Speaking of Rick, we have him once again pleading his case to Hershel for shelter.   Rick also lets him know that they found the barn.   Rick plays politics and offers the concession of not killing all the walkers and burning the structure to the ground.   At some point, I hoped Rick would realize that Hershel was a crazy person, but how crazy is it to want to hold on to the past?   We all do it in one way or another.   Hershel’s way was to preserve these “people.”   Hershel has been told that he has no idea how bad it is out there.   He hasn’t had his “let go moment” yet.   Maggie, having just had her “let go” moment listens is as Hershel hands Rick a death sentence by repeating his request of having them leave.

Shane is unhappy with the arrangement that’s been struck.   Shane wants his gun, and he wants to kill all the walkers in the area.   These are not unreasonable requests.     Shane makes some excellent points.   The farm isn’t safe, Sophia is probably dead, and we need to protect ourselves.   He’s frustrated with Rick. This is where he fails.   Shane was the leader before Rick showed up, but now everyone looks to Rick for the answers.   Shane sees this as yet another thing he’s lost to his friend.   Pretty soon Shane is going to bubble over and not be able to contain himself.   One thing that might set him over the edge is the possibility of Rick raising his child.

I know I give Lori a lot of shit for creating drama, and it would be hypocritical to say that despite creating drama I like Maggie right?   Well, the dividing lines for me are the character’s outlooks.   Lori is looking backwards.   She wants the world to go back to her world of soccer moms and chatting at the salon.   Maggie wants those as well, but she’s looking forward.   She confronts her father and tries to set him back on the path that makes him a good man.   Much like I have no perspective on what it’s like to live in a worn torn African nation, Hershel has no idea what it’s like to live in the new zombie infested world.

Hershel decides to go out on a limb and bring Rick in on a project.   He shows Rick a few walkers stuck in a riverbed and explains his side.   No matter what you call them, they are still people, and they should be treated as such.   Hershel asks Rick to change his perspective.   It’s a nice turn around since most of us would be agreeing with Rick.   They then begin the process of bringing the walkers back for storage.

Shane confronts Lori about the aforementioned pregnancy.   He claims that the child is his, Lori claims otherwise.   She goes as far to say that even if it is genetically his child, it will never be his child.   This of course sets Shane off into one of his crazy rants about wanting Rick dead.   He didn’t say he’d kill Rick, he just meant it that Rick is not made for the new world.   He doesn’t have to kill him, the world will.   At this point, someone should hang a sign around Shane’s neck that reads “Please do not taunt the sociopath.” 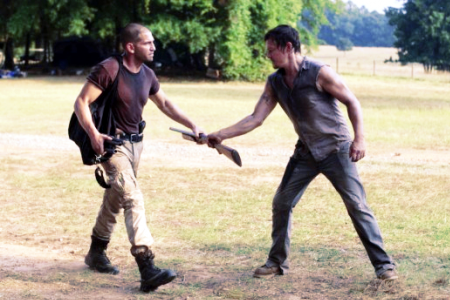 Amped up on jealous rage Shane goes looking for the guns.   Because that’s what a man who’s in his frame of mind needs, weapons.   He quickly realizes that Dale was one step ahead of him and absconded with them.   After Shane catches up with Dale in the swamp, the two have a nice chat.   It went pretty much the same as their chat last episode.   Dale was reasonable and Shane was crazy.   Dale makes a comment about how the world going to shit didn’t drag him down, and implies that it is dragging down Shane.   This is where the show gives me fits.   I agree with almost everything Shane stands for … you know, without the lusting after a friend’s wife and the crazy rants about waiting for said friend to die.   Shane sees the world for what it is and defines it.   In a very basic mantra he says in the episode, to survive, you have to fight for it.   The show is trying to demonize him.   Sure, his personal skills need a brushing up on, but those are secondary now.   Unfortunately, Shane’s actions within the group are what’s going to bring him down.   If he was on his own, he’d have a shot.   Of course if he was on his own, what would he be fighting so hard to protect?

In my notes about the episode, I have apparently written “Not again with the fucking humanizing of Daryl and the fucking Cherokee rose.”   Its about an hour after watching this episode, and writing this down and I have completely forgotten this scene.   I guess I hated it.

While most of the characters are like little drama batteries, giving off their drama fields and creating drama webs, Glenn is like a negative drama particle.   That is why I love his character.   As of this moment, he’s the best thing on the show.   He cuts through the bullshit with Maggie and says how he feels.   Maggie in turn, unlike Lori would, reacts like a human being is supposed to act and forgives Glenn.   Honestly, how could you be mad as him, he’s like an Asian puppy dog.   What he says rings true.   Call them people call them walkers it doesn’t matter, they are dangerous.

As Shane returns with the guns, he starts passing out weapons like its Halloween and then heads towards the barn.   Its time for a good ol’ fashion shootout.     The group notices that Rick and Hershel are dragging two walkers back to the barn.   Shane loses it.   He starts spout off that the walkers need to go, he makes mention that Sophia is a lost cause and they should hit the road again.   He’s tired of pussyfooting around.   He shoots the female walker a few times explain that if they are people, how the hell is she still standing, how is she still coming at him.   After a few more shots, he executes her.   Then for good measure, he opens the barn and with a few others forms a firing line.

One by one the group joins Shane.   Glenn even receives Maggie’s blessing before hopping into the fray.   Hershel watches on in horror.   From his perspective they are just sick.   What he saw was akin to watching someone mow down a cancer ward.   Pretty sick shit if that’s what you believe.   This is Hershel’s “let go moment” … and its pretty horrible.   When all is said an done, the group gets an unexpected surprise.   The last walker out of the barn is Sophia.   The search is over.   Fucking finally.

As Carol and some other scream in terror, some recoil in disgust.   Even Shane doesn’t know how to handle this.   This moment defines Rick as a leader.   He has to make the tough calls.   He knows that there is only one solution.   Most importantly, he knows that you can’t ask others to do the dirty jobs.   Hopefully this works out better for him than poor Ned Stark.

So there we have it.   The midseason break, and not a moment too soon.   I’ll be honest; I thought there was a point this season where the show was beyond repair.   While this certainly isn’t the best show on TV, its still entertaining.     I’ll be looking forward to February … but mostly that’s because in February I will have had Justified back for three weeks.