THIS WEEK ON Walking Dead: Chupacabra 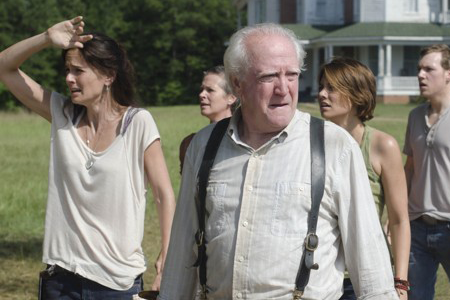 We start this week’s walking dead with more flashbacks.   I don’t know if I’m softening or if its getting a little better, but I didn’t hate this flashback.   Of course it could be because it involved one of my fantasies, firebombing Atlanta.  So we’re treated with a little prequel about how our merry band started and then is off to the land of the dead.   Oh, almost forgot to add the heavy handed reminder that Shane banged Lori and told her and Carl that Rick was dead.   Can’t forget that, it might come up later.

Does anyone give a shit about Sophia anymore?   I get it, she was used as a way of keeping the group at Hershel’s for a few days, but with other events cropping up, I’m sure they will find her soon in a matter-of-fact manner.   At this point, when they find her, she better be clutching gallons of water and living in an underground bunker full of lucky charms and peanut butter cups.

Glenn and Maggie amuse me.   I hate most of the other relationships.   Its probably because they all contain drama.   Glenn and Maggie have no drama.   Its just “Nice Shoes, wanna fuck?”   Its simple and refreshing.   It lets us know that not everything has to be a love triangle, or one way romance.     After a brief conversation in an episode full of 20 second snippets of conversation, I liked this one the most.

We jump to light hearted conquest talk with Shane and Rick   I understand the need for exposition, but to break to reality does it make sense to have two cops searching one grid?   I mean, wouldn’t you want two trained officers to spread out to 1.) Maximize useful personnel and 2.) train people in tactical skills?   But hey, who needs that when you can talk about statutory rape and killing fats guys.

Despite my problems with the anatomy of the scene, I get its purpose.   Shane needs to justify his killing of Otis.   That means changing from people to numbers.   Its easy to erase a number than a person.   If you look at it from a tactical standpoint, everyone you lose is one less mouth to feed, one less ego to appease, one less person to have to look out for.   Shane puts forth the idea that this search for Sophia has cost more than it can hope to regain.   Rick of course disagrees.   Rick is still a cop.   He’s got a cop’s mind.   Shane’s become a survivor.   If I was there and I was casting a vote, I think I’d like Shane’s math more.

Daryl finds a doll … loses my interest … then he falls.     Caffeine Powered and I talked about last week’s episode.   We were so uncomfortable at that Cherokee Rose speech.   I suggested that the writers were trying to humanize him.   Make him fit into their little world.   Does no one realize that you can be an arrogant jerk without being an asshole?   Its almost like they don’t know what to do with the character.   So now because they are confused about how he should behave, I have to watch Daryl traipse across the wilderness with an arrow in his side while he talks to Svenning(+5 points if you got the Mallrats reference) about how cool it is to be bad. 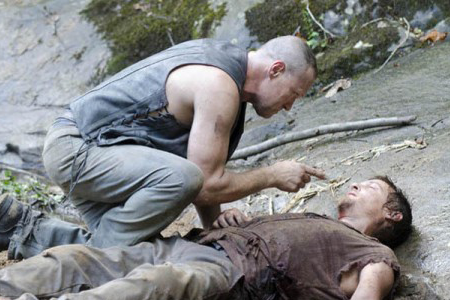 The payoff is we get to see Daryl kick some ass.   After a walker tries to eat through his boot of all places, Daryl mans up, crushes one of their skulls with a tree limb, and then pulls the arrow out of his side so he can shoot the other.   He then makes Tom Berenger (+10 points if you got the Platoon reference) proud and remakes his necklace of ears.   Time to double time it to the farm soldier.

Ok, so maybe there is a little drama with the Maggie Glenn romance.   Hershel doesn’t want Maggie involved with anyone outside his group.   In an earlier conversation with Rick that lasted 8 seconds, they came to the mutual agreement to handle their own shit and not interfere with one another.   Hershel assures Maggie that Glenn and his cohorts will be moving on soon and wants her to help him keep them all separate.   Seems like Rick’s request to stay is going to get shot down faster than Shane’s next pass at Lori.   As a side note, doesn’t Hershel know that the quickest way to get your daughter to fall for someone is to disapprove of that person?   I guess not.

Glenn pontificates about how a line as perfect as “Hey, wanna go halvesies on a 12 pack of condoms?” could have failed.   He then chew’s Dale’s ear off about bitches being crazy.   This has to be the most awkward conversation Dale’s had in years … and bear in mind he lives in a world where the dead walk.   Glenn makes a great point, “Bang the hot chick now for tomorrow you may die.”

That’s no walker, it’s a hilibilly … Sorry, I just wanted to pseudo quote Star Wars.   See how they slipped in the line about how Hershel wants to deal with walkers?   I wonder if that will have anything to do with future events.   So Andrea, all full of piss, vinegar, and according to Glenn, tampons, cracks off a shot at what she thinks is a walker.   At this point, we know its Daryl, so we assume that she’s going to miss.   Nope, bang, right in the head, down goes Frazier … too soon?

This is a great commercial break.   I did not see Daryl getting shot coming.   I thought it was going to be a tension filled scene while Andrea was dialing in the range.   Flashing between Rick and Daryl exchanging empty threats, while Dale hopped up on the RV and saw that it was Daryl and called off Andrea.   And then it hit me.   I know what’s missing from the comic.   Dead people.   No, not zombies, people dying.  In the comic, people die.   People die a lot.   You ever get used to it.   It happens even when you don’t expect it to.  In this moment, I am ok with Daryl dying.   I know at this point he’s been my favorite character, but what a perfect way to say “Hey guess what, no one’s safe.”   Not since a certain pilot’s untimely demise in a certain movie based off a certain TV show that may or may not have been named after a bug that has a glowing ass have I hated and loved a death so much.

Its at this point that I switch over to the Patriots games.   Not that this was in integral part of the episode, I just want to all to know that I gave up roughly 45 minutes of good football to watch this show so I could write this recap ASAP.   During this break, I got to see the Big Gronkowski make a great catch for a first down during a drive with less than two minutes in the half.   It was initially ruled a fumble, but was overturned on review.   GO PATS!

Well … I guess I was wrong.   I’m happy Daryl is alive, but I’m pissed that the writers wasted such a powerful opportunity to send a message that they are not afraid to stray from the formulaic bullshit that appears on TV.   I’m also pissed because this is going to cause more drama between these characters.   Its only a matter of time before they just end up killing each other.   Shane’s math is looking better and better.   He’s there to point out that they almost lost their best tracker over a little girl who is as important as a fart in the wind.

Let’s all move on to awkward dinner shall we?   Have you ever seen so many people who obviously did not want to share one another’s company?   It was like a diner in the 50’s after a black guy sat at the counter.   Glenn decides that this is the perfect opportunity to show everyone that he’s smoother than Skippy and tries to get the ball rolling.   Then the Greens have to ruin it all by talking about dead Otis.   Glenn is rewarded with the promise of sex.   Mission accomplished buddy.

Finally we come to the Barn.   Glenn must not know the stereotype of the farmer’s daughter because he asks if she’s ever done it in a hayloft.   This is like asking if she’s ever taken a breath of air.   So Glenn makes his way to the barn to throw down rose pedals or whatever hackneyed romantic thing he can think of when he’s greeted by a party of undead.     Talk about the ultimate coitus interruptus.   I already knew how this episode ended.   This is one of the major events from the comics.   I’ve been waiting for this event for a while now.   The interesting thing will be to see how they handle Rick and his group’s reaction to Hershel’s pokemon-esque obsession with walkers.