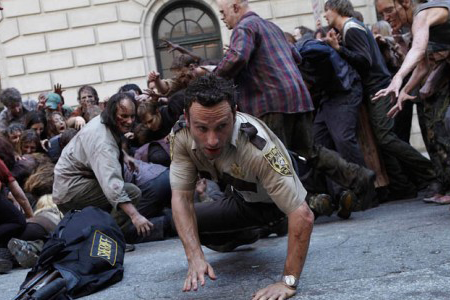 The Walking Dead isn’t a good show. It’s not! It was awesome. Then it was awful. This season it’s been tepid. Hopefully it’ll figure itself out and return to its (short, short) glory days. AMC has announced the show will have even longer to find its stride again, renewing it for a third season.

The Walking Dead” is based on the comic book series written by Robert Kirkman and published by Image Comics. Glen Mazzara serves as series’ showrunner. Kirkman, Gale Anne Hurd, David Alpert and Frank Darabont are executive producers. Greg Nicotero is a co-executive producer.

“Today we are pleased to announce that the ‘dead’ shall live as we proudly renew ‘The Walking Dead’ for a third season on AMC and, globally, with our terrific partners at Fox International Channels,” said Charlie Collier, AMC’s President. “We are thankful for everyone’s contribution in front of and behind the camera as we continue to make ‘The Walking Dead’ a unique television experience. And, we are so proud as it continues to set viewership records around the world.”

FOX International Channels rolled-out its global launch for “The Walking Dead” this weekend, with premieres on FIC’s cable networks in Europe, Asia, Latin American, Africa and the Middle East. The series’ international premieres delivered equally impressive results in all major international TV markets, and broke pay-TV ratings’ records across the world. Over 10 million viewers in 122 countries tuned in live to watch the second season premiere of this highly anticipated returning drama. And, FIC will once again be the international broadcasting partner for the series with Entertainment One continuing to distribute in non-FIC markets.

If this show runs longer than Game of Thrones I’m going to cut myself.