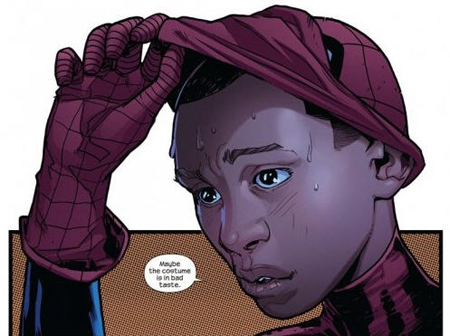 A brief story. This week I was on Google+ for one of my rare visits. There’s nothing going on in there. Tumbleweeds and picture spam. Browsing, browsing. Eventually on my barren News Feed, something caught my eyes. It was a picture my friend posted of an Ariel from Little Mermaid from a coloring book. Ariel was colored in black. I suppose brown is more precise. My friend said something to the extent of “The majority of Disney’s characters are white, so I do what I can for my daughter”, a daughter who is half-white, half-black. All awesome, given her parents.

I thought to myself, that sucks. A couple days later Marvel dropped on the world Miles Morales. He’s the new Spider-Man for Marvel’s Ultimate universe. He’s also half-black, half-Hispanic and fully pants-shitting for the closeted white people out there in the world who think everyone with a skin tone is coming for our tax money, our educational system, and our hospitals.

I think Miles Morales is awesome.

I have never suffered the slings and arrows of discrimination. Nor of looking around a world of the fantastic and seeing characters who don’t match my gender nor my race. I am a middle-class white male, and while I am vaguely aware of it, I’ll never understand the sort of privilege that chance of birth has brought me. I will never know because I will never suffer said slings, or endure such arrows.

Even given that, as I’ve grown up and felt nebulous nodal expansions in my head, a general empathy has let me to feel for the comic book fans (and really fans of all media and arts) who look for someone that matches their complexion, their gender. There aren’t many ethnic characters. Of prominence. Sure Luke Cage is an Avenger and the Black Panther may be the Man Without Fear for a couple of issues, but no character that is a franchise-pulling entity. A Spider-Man.

And the women? Listen you don’t have to be a raging Feminist — though I think I may be turning into one the older I get — to explain to you that Emma Frost’s outfit is fucking ludicrous. A couple of weeks ago Rogue adorned the cover of X-Men: Schism #2. Oh sure she was lifting an enormous boulder, but what was truly enormous were her tits. For some reason Rogue runs into battle with her X-Slut Suit not filled zipped up. Flabbergasting.

So Miles Morales is awesome. A multiethnic kid taking over the reins of one of Marvel’s most famous characters. We live in a tightening world, and for those of us in the United States (and I suppose fairly all over), a persistently diversifying population. I’m not calling for wholesale changes in the line-ups, but I’m certainly going to clap when a major publisher takes a chance and replaces old Peter Parker with a kid whose last name is Morales.

Big-ups to Marvel. If you want to be optimistic about it, the idea is that they identified a problem and they’ve taken means to correct it. And people thought Donald Glover was out of his gourd last year when he began campaigning for Spider-Man. I mean oh sure ask Sean Young how well campaigning for a superhero goes. She went batshit crazy, people thought Glover was insane-o because of he was black.

Buh!-Buh!-Buh!, Peter Parker is a white guy. How can a black guy…play a white guy?!

The mind, it boggles.

Big-ups to Marvel, even if you want to be pessimistic about it. The cynic in me tells me that they’re simply trying to rope in new readers. The youth of this nation are of a population who look less and less like Steve Rogers. What is a better way to reach out to them than to offer them someone who they may be relating to better. It’s a sales thing! A money grab! Cha-ching!

My real feelings are that I don’t care why Marvel did it. I don’t care if they’re genuinely concerned in accurately reflecting our diversifying population, or if they’re just trying to make a buck. ‘Cause whatever new readers they get because they’re drawn to a suddenly more relatable Spider-Man aren’t going to care why Miles Morales came into being. They’re just going to be excited that he’s around at all.

The idealist, the cynic, both of them are irrelevant. What matters is that Morales is here, and hopefully he’ll invite more people into the funny book reading game.

If Marvel isn’t full of shit, and if this isn’t a money grab, they can’t stop here. If they’re generally interested in reflecting a multicultural society, this is a great first step. It just can’t be the only one. You can’t just stick a poster of MLK up in your classroom and think you’re progressive. It’s a neat gesture, but have to be carried through. Let’s bring more characters of different ethnicities to the forefront. Let’s zip up the chesty vixens’ outfits and maybe get Emma Frost a pair of fucking pants. For God’s sake.

It’s a good first step, but that’s all it is.

My real fear? My real fear is that Miles Morales doesn’t stick. This is the one time I think that Marvel has to keep their superhero in the grave. Keep Parker a corpse. It’s essential. If there was ever a time to test the lasting power of a mainstream Cape’s death, it is now. If Marvel’s serious about this. If Marvel genuinely cares. Maybe I’m being naÃ¯ve, not expecting the greenbacks to rule the roost.

For it says nothing positive if they bring Parker back. It’s turning their back on a multicultural movement. It’s reversing diversification. They may be acknowledging that only Peter Parker is Spider-Man, but there is still that rippling unspoken gesture that says: Spider-Man has to be white. It may not be spoken, it may not be acknowledged, but it’s there. So Marvel, put your money where your Cultural Stand claims to be. Regardless of the sales or the fan pressure, keep Morales slinging the webs.

I’m down with Morales, and I’m definitely down for what Marvel is suggesting it stands for. Whatever their intent, they’ve given more people a familiar face to latch onto. To relate to. At least for now Marvel is aiming to be a more diverse Universe. It’s a good first step, let’s just hope it isn’t the only one. And that it lasts.