Archives
« More Photos From Filming of ‘The Dark Knight Rises’ Feature More Bane, and Marion Cotillard.
Fat Mac Featured In This Trailer For New Season of ‘Always Sunny’, God I Need This. »

GM Has Autonomous Pod Car, Will Take You Hands-Free Wherever You Want. 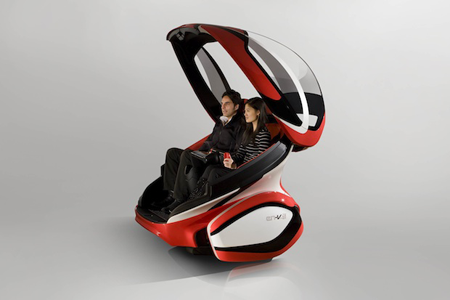 Oh great! GM has an autonomous Pod Car thing, the  Electric Networked-Vehicle (EN-V). Someday in the near future you’ll be able to summon this death trap to your side with your smart phone. It’ll appear, you’ll punch in coordinates, and pray the robotic uprising doesn’t happen that day.

The prototype vehicle, which has been touring expos, car shows, and conventions, doesn’t necessarily represent what the production EN-V will look like. The two-wheeled concept is based on a Segway balancing platform, has low ground clearance, can’t drive in rain or snow, and doesn’t even have the juice to make it up a driveway ramp. Abuelsamid explains that the production version will retain the basic features–small size, advanced communications and sensing technology, vehicle to vehicle (and vehicle to infrastructure) communications, and, of course, an electric powertrain–but it will be “designed to be more practical for real-world use.”

GM hopes to begin field trials in the next two to three years, but the vehicle probably won’t go into production for about 10 to 15 years, largely because of our current lack of precise GPS capabilities. “A big part of autonomous capability comes from GPS. Our current precision is a maximum of three meters, which really isn’t adequate for reliable autonomous operation,” says Abuelsamid. “Over the course of the next decade or so, [they] will put up new GPS satellites to improve precision and reliability. We’re hoping that gets improved, but in the interim we can still learn a lot.”

Once the EN-V is ready for production, it could be deployed in any number of places–gated communities, college campuses, and megacities, where pollution and overcrowding could be alleviated by the emissions-free pod cars. Abuelsamid also speculates that the EN-V could make an ideal addition to a car-sharing service, since users could both summon the vehicle using a smartphone app and tell the EN-V to park itself when they’re finished using it.

This fucking world is turning into Wall-E, man! Fight the future. Though I have to say this would be pretty dope for drunkards.