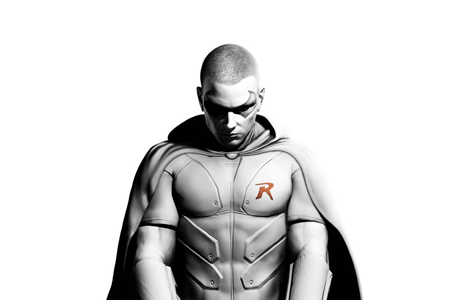 The pre-order wars continue, scorching the ass of gamers everywhere who just want to be able to buy a game packed with loot. If you pre-ordered Arkham City somewhere other than Best Buy, you may want to reconsider that decision. They got the Robin. The Robin guy. Despite looking like an extreme shaven-head asshole, they got him.

While supplies last, pre-order the game for an exclusive downloadable Robin character. Robin is a fully playable character in the new and improved challenge mode in Batman: Arkham City. The Tim Drake Robin pack is available exclusively to fans who pre-order the game from Best Buy on Xbox 360, PC and PS3. Robin comes complete with his own unique gadgets and special moves, and will be playable in all challenge maps in the game, as well as two additional challenge maps that are included with the pack: Black Mask Hideout and Freight Train Escape. The pack will also contain a bonus Red Robin character skin.

Not my Tim Drake! And I’ll probably buy it at Gamestop anyways.

Did this change your destination for procurement, true believers?