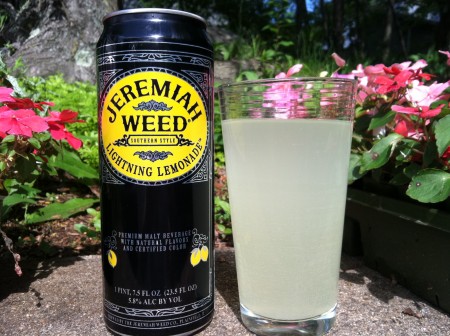 I’ve been consuming alcoholic lemonade for longer than I’d like to admit. Well before I could appreciate a good brew, I was sippin’   on bottles of Baby’s First Buzz, laughing as my face got warm and everything just seemed better. Sure, it was a great gateway into the realm of inebriation, but once I was able to comprehend the majesty of stouts and porters, I didn’t look back.

Recently, my close friends have been telling me all about Jeremiah Weed and his wonderful Lightning Lemonade. Alright, so it hasn’t been my friends so much as it’s been the ads on ESPN that I’ve seen while throwing myself full-force into the NHL Playoffs. But fugg it, television’s been there for me plenty of times that friends and loved ones haven’t.

When I was depressed about existence being the fancy of an ultradimensional swamp-child’s daydream, did my friends understand? Hell no! But Kramer, he was there for me! He understood that life is life, and there’s no more to it! So there!

In any case, I decided to punctuate the sentence that is the workweek   by snagging me some Lightning Lemonade. I discovered that my local hooch-dealer carries fat-ass pint cans of the malt beverage, so that is exactly what I procured. Hell, given how nice out it is, I was half-tempted to brown-bag this muthafuggah and suck on it while taking a stroll around the block.

But I wouldn’t want to run into the wrong guy and lose my adult-soda.

So I decided to sit in my backyard and ride the lightning. After cracking it open, I poured myself a glass of Lightning Lemonade. Visually, the malt looks like any run-of-the-mill lemonade. However, when I took a whiff of the crunk-juice, my nose definitely detected an aroma of brain-killer. I think I could smell every drop of what the can advertises as a 5.8% ABV.

Realizing that I didn’t know anything about Jeremiah Weed, I went to the company’s website in the hopes of getting my learn on. However, this is all they had to say about the product:

Okay. So, I’m to understand only that this is a lemonade that will give me a funny feeling? Good enough. Time to drank.

Lightning   Lemonade goes down smoothly, for sure. However, I can’t say that I’m entirely satisfied with the experience. The drink isn’t sweet enough to earn lemonade points, as there is a distinct alcohol-swab aftertaste. On the other hand, the ABV isn’t potent enough to elevate this concoction to #SUPER_WILD_PARTY status.

Unfortunately, the drink is stuck somewhere in between.

Also, this liquid is hardly carbonated at all. I may be misremembering (it’s been years), but I want to say that Mike’s Hard Lemonade has a carbonation-level worthy of a straight-up soda-pop. Which I enjoy. Hell, it might’ve been the very factor that shepherded me from away from bubbly-sweetness, into bubbly-drunkenness, and eventually into bubbly bitter-drunkenness.

By no means is Lightning Lemonade a bad drink. If I rolled up to your BBQ and found that you stocked a cooler full of `em, I’d sip away. But I don’t find myself immediately desiring another pint.