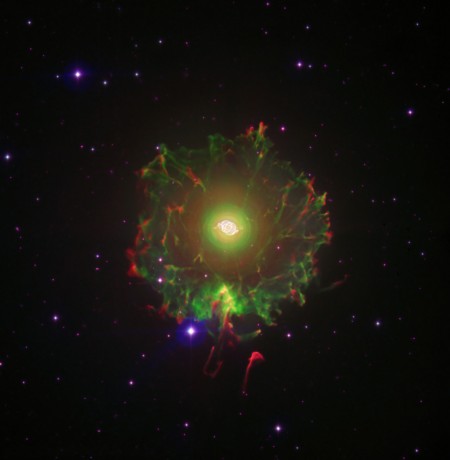 Oh shit, look at her purr with sexiness! That’s the Cat’s Eye nebula, and the magnificent halo that surrounds it.

That stunning image is from the 2.5 meter Isaac Newton Telescope on the island of La Palma in the Canaries. The halo around the bright inner region is actually huge expanding shell of material centered on the nebula’s central star. And I do mean huge; that halo is nearly 6 light years across – 60 trillion km, or almost 40 trillion miles!

When the star first started to die, it expanded into a red giant, much larger and cooler than our Sun. The star blew a thick, slow wind of material from its surface, much denser and slower than the Sun’s solar wind. This material expanded and slammed into the material (gas and dust) between the stars. As it did so, the long delicate fingers and smaller, denser knots of material formed.

This is common in space when expanding material interacts with stationary material. It’s called Rayleigh-Taylor instability, and can create incredibly beautiful and intricate-looking structures. In the Cat’s Eye halo, ultraviolet light from the central star causes the outer halo to glow like a fluorescent light. Different gases glow in different colors; here red is hydrogen, blue is sulfur, and green is oxygen.

The halo itself is 40 trillion miles across. That’s filthy with cosmic awesomeness.