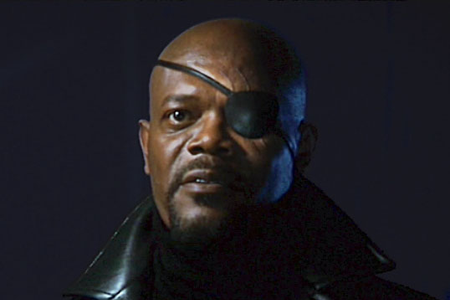 Ah, the soon to be officially ciché Marvel movies post-credits scene. Yep. Just stick Samuel Jackson in some shitty forty-second scene in with something leading up to the Avengers flick. They’ve been doing it for three years, there isn’t any reason to stop now. Apparently, purportedly, the post-credits scene in Thor tips off the villain for The Avengers.

Hit the jump for spoilers, ya fucks!

A description of the post-credits scene has linked, and – assuming it’s accurate – it has some serious implications for The Avengers. Here’s the description given to Latino Review:

“We see Dr. Selvig (Stellan SkarsgÃ¥rd) meeting with Nick Fury (Samuel L. Jackson), who is standing in front of a table with a large metal case on it. They discuss the latest discoveries that Selvig and his team have made in relation to alternate universes and Fury asks for his advice in regards to the contents of the case: the Tesseract/Cosmic Cube. When Selvig asks what is it, Fury responds that it is a source of immense power. The camera pans back to Selvig, and a reflection reveals that Loki (Tom Hiddleston) is in fact now possessing Selvig. Loki/Selvig responds, ‘That’s very interesting…'”

Stellan SkarsgÃ¥rd is already confirmed to be reprising his role as Dr. Selvig in The Avengers – of course, if he’s actually just possessed by Loki, then that’s pretty good evidence that Loki really is the main bad guy in The Avengers. That said, this is all hearsay and rumor, so definitely don’t treat this as confirmed just yet.

This seems to make sense, so I’m going to go ahead and write this off as true. There’s been rumors that Loki and the Cosmic Cube have been in play for a while now, with the leading rumor suggesting Loki uses it to summon the motherfuckin’ Skrulls. Pissed off alien races are a good reason to assemble Earth’s Mightiest Heroes!, so I’m cool with it.