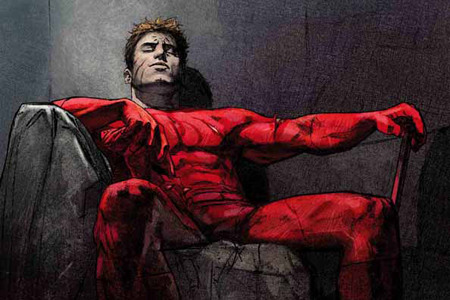 David Slade, the man behind 30 Days of Night and one of the Twilight abortions is getting the honors of rebooting the Daredevil franchise on the silver screen.

Variety exclusively broke the news, and though Scarpa was reportedly hired in February 2010 to work on a script, The Hollywood Reporter says no writer has been attached. What’s interesting though is that Slade’s film will supposedly be a “continuation” of the material set forth in the 2003 film that starred Ben Affleck, just without the actor’s involvement.

Wait, so it’s not a reboot? Or is this something like the recent Spider-Man is/isn’t/isn/sort of is reboot dance?

Daredevil’s one of my favorite Marvel characters, especially in the past ten or so years. The handing down of responsibilities from Bendis to Brubaker to Diggle has begat one of the most solid runs in recent superhero comics. At least for my taste. I’m awaiting someone to swoop in and correct my ignorant ass. So I want my boy Murdock handled well, and maybe David Slade is the director to do it. While I don’t care for anything Twilight, I thought that 30 Days of Night was solid.

Per usual, color me cautiously optimistic.