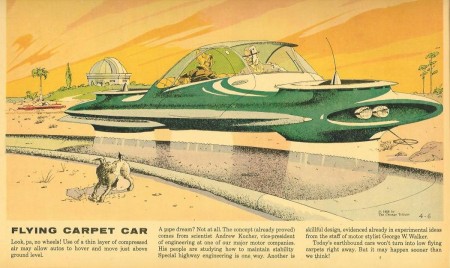 I didn’t know of Andrew A. Kucher prior to this evening, but evidently he is an outstanding pimp of futurism swankitude. What the fuck am I typing? Anyways. Kucher was vice-president of Ford back in the day, and he wanted himself a fucking flying car. Like, he really wanted one.

Kucher is credited with having conceived the idea of the hovertrain in the 1930s, a precursor to today’s Maglev trains which use magnets rather than compressed air to achieve a similar effect. Newspapers from April, 1958 describe a three foot long hovercar model that was shown to reporters in Detroit. Riding on a cushion of air, Kucher described how this “Glideair” car could one day achieve 200-500 miles per hour since it didn’t have tires which burn up and lose traction or control. An Associated Press piece even quotes Kucher as saying that such technology would be in use in the “foreseeable future.”

What the fuck is this shit! Why am I not cruising with my Martian space-babe in my fucking flying car? We have pioneered the visionary Shake Weight, but we can’t get ourselves together and put together something everyone has been hurting for since, like, well, at least the 1950s? Our collective conscious is fucking feigning for this shit.

Someone resurrect Kucher and let’s lead the charge.