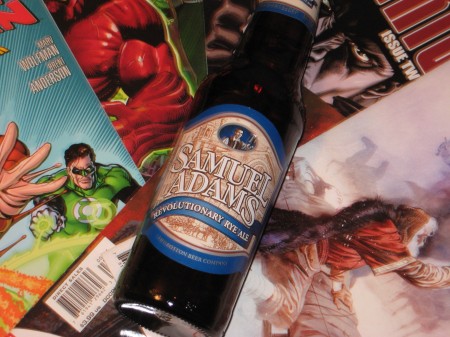 I have no shame in admitting how I choose the beers I drink. Although I know that my tum-tum favors dark brews, porters and stouts, I often drink the beer with the most appealing name, packaging, or slogan. It’s shallow, I know. But hell, marketing campaigns are almost as irresistible as the executives that create them. Throw in a silly cartoon mascot or the right buzz-word and I’ll give your beer a shot.

Today, I’m drinking Revolutionary Rye Ale. The reason? Other than the fact that it’s brewed by the indomitable Sam Adams, I like the word revolutionary. From a language standpoint, I think the word is attractive both visually and auditorily. Six syllables. Every vowel represented, even the bastard-son Y. An adjective. Or a noun! What’s not to love about the word itself?

Moreover, I can’t help but fall victim to the connotations. And I’m not even talking about those of American history, the butt-whomping of King George III‘s dominion over the colonies. Although that was pretty sweet and inspired one of cinema’s greatest accomplishments.

No, I love the most stripped-down conception of revolution: a drastic upheaval of accepted traditions and dogmatic practices in favor of originality and progress. Why live according to yesteryear’s tired structures when new ones can be constructed? Why don’t we demolish the mausoleum and put a fucking museum over it? Why sail the seas when we can explore the stars?

Maybe I’m just dreaming of a world in which the collective consciousness continues to evolve. But I’m not alone. The Beatles knew what I’m rambling about. Hell, so did Pantera.

Okay, back to the beer! When I went to the liquor store today I took notice of a new Sam Adams variety pack – American Originals. While I’ve sampled most of the beers included, there’re also two exclusive beverages. Bastards! They knew I would buy a $15 twelve-pack for the two beers that have yet to grace my lips! But since I actually like the other four drinks, I figured that I wasn’t really getting ripped off.

After tearing into into the twelver, I found a description of Revolutionary Rye Ale:

The rye in this deep reddish-hued ale adds a spicy finish to the slight sweetness of the roasted malt. Light pine and citrus notes from German and American hops complement these flavors, making this medium-bodied brew perfect for the transition from winter to spring.

I poured the ale into a standard pint glass and took note of its rich red tone. At first, a formidable head capped off the glass but quickly waved bye-bye. With a bit of light still managing to penetrate the dark amber, I have determined that the appropriate label for this brew’s color is Dark Phoenix. And just like Jean Grey, the sight of this brew is bound to attract men and women despite their objections otherwise.

However, when I took a whiff of Revolutionary Rye Ale the darkness seemed to dissipate. This beverage touts an airy, floral aroma. Some citrus cut through as well, but my nose didn’t detect any of the promised spicy notes. But if you dab a little bit of the liquid on both wrists, you’re sure to get the partner of your choice at the Enchantment Under the Sea Dance.

Moving on to the most important test, I was satisfied by the potable’s flavor. There was an initial bite of hoppiness which put me on guard, but I was appeased by a curbing sweetness. I perceived both an indistinct citrus element (which I’ll chalk up as lemon) as well as a light roasting. Additionally, a lingering reminder of the beverage stayed in my mouth long after swallowing. But overall   the ale went down smoothly, proving to be medium-bodied and worthy of a multi-bottle experience.

Ironically, I wouldn’t call Revolutionary Rye Ale revolutionary. It’s a solid medium-body that I could see myself enjoying with a couple of burgers. Truthfully, I don’t know if I’d buy a sixer of these guys, but as part of a variety pack it fits right in.