Archives
« Blizzard Confirms “Titan” Is Their Next MMO. DO WANT.
Press Start!: Finally The Sex Game You’re Waiting For. » 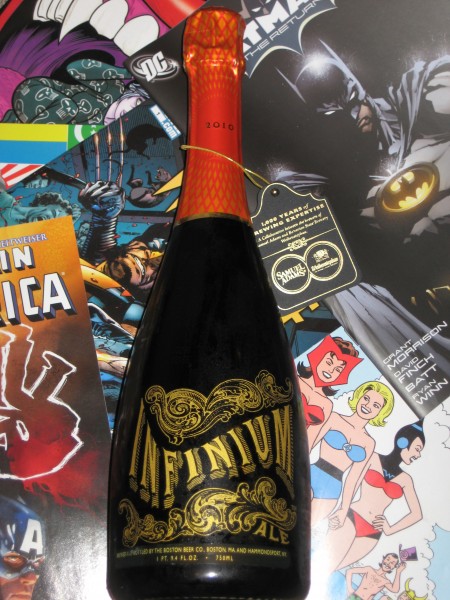 Progress is a tricky concept to grasp and an even trickier one to execute. On the one hand, there is something to be said of tradition. Of the fact that there are those who have stood the test of time, proving their worth while the novelty of what’s considered in vogue crumbles into ephemeral ash.

It’s foolish to disregard the ones who help to set the sun.

However, we must also avoid becoming dogmatic adherents to yesteryear’s traditions. In dodging such an existential bullet, we remain receptive to new ideas. To the notion that the terrain explored by pioneers and voyagers may be worth investigating. There is an acknowledgment that all is not known and an exhilaration in trying to unearth what this may be.

In an ideal world, the Titans would help usher in the Olympians.

This dream is realized with Infinium. And that is why it is damn near perfect.

Samuel Adams has prided itself on being the brewery that pushes the limits. As the largest American-owned brewery (which still means they only hold a fraction of a percent of the total market), they have created a pantheon of high-quality beers that defy that REGULAR/LIGHT status quo. Samuel Adams has also helped redefine the concept of beer by producing beverages such as Utopias, the highest ABV beer in the entire world. Not even thirty years old, the brewery is unquestionably a revolutionary.

Fortunately, Sam Adams also has the awareness to acknowledge that there are others who have been in the beer game longer. A lot longer. This is the case with Weihenstephan Brewery – founded in 1040 CE (that’s right, 970 years ago), they are the world’s oldest brewery. Beer producers, like one of the dudes in this video, look at Weihenstephan as the Vatican City of beer.

In the sense that it’s immense and powerful. Not that it hides child molesters.

So what happened when the hot-talkin’ rookie teamed up with old bastard who’s seen it all? Well, they formed a lethal weapon.

And that weapon is called Infinium.

In order to better understand this collaborative effort, it’s worthwhile to take a look at Sam Adams’ self-description:

The challenge was to create a new one-of-a-kind, champagne-style beer, while operating within the confines of Reinheitsgebot; the German Beer Purity Law dating back to 1560 which allows the use of only water, malt, hops & yeast. Using these four classic ingredients and the traditional brewing process to reach their end goal would require the brewers of Samuel Adams and Weihenstephan to innovate like never before. Combining their 1,000 years of brewing expertise and creativity, the two brewers created a groundbreaking brew that’s crisp and champagne-like.

So Infinium is essentially a champagne-ale created by beer’s mega powers to modern brewers can create something incredible while still adhering to a law virtually half a millennium old. Oh shit. There was no way in hell I was going to pass up this most glorious opportunity.

With the help of my friendly neighborhood liquor merchant, I got my hands on two bottles of Infinium. Although I’m bringing one to a Christmas party, I couldn’t help but crack open the other for personal consumption. But after this experience, I think may end up hunting down a few more bottles.

I popped the cork out of Infinium‘s fat-bottomed bottle and gave it a pour. Now, I’m sure that using a champagne glass might be ideal, but I used a standard glass. After filling the goblet about half way, I gave it an ocular assessment. The ale settles as a translucent orange, the fading spirit of Autumn making one final appearance before making way for the winter solstice. A sizable head formed but quickly subsided into oblivion. 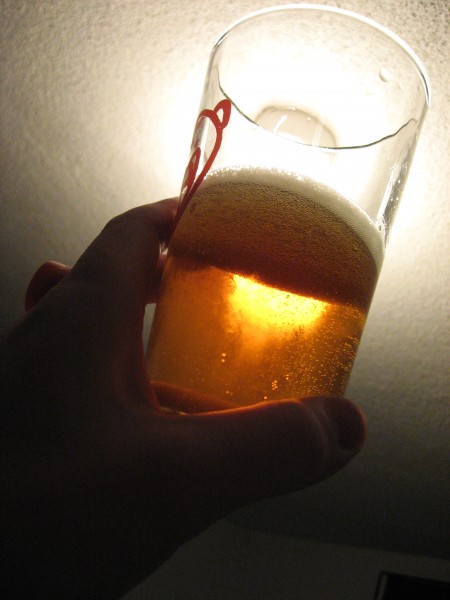 That’s Not a Lightbulb, It’s a Halo

I then played bloodhound, putting my snout right into the wide mouth of the glass. Carried by the effervescent liquid, I instantly detected a floral sweetness. A note of alcohol cut through, but was curbed by a lingering bit of yeast. If the scent could have somehow been warmed up, I would’ve sworn that I was walking though a bakery that was pumping out banana breads and lemon pies.

It was time for the moment of truth – I put the needle to the record and let it hit me with its style. Infinium first hit the tongue with an incredibly sweet right hook. This sweetness manifested as a light fruitiness, a flavor that I found comparable to apple. Not as in apple cider, though – it’s not nearly as strong. Alcohol then made an appearance, but not in his usual grumpy, bitter demeanor. Instead, he showed up with a big fat grin and declared, “What’s up GUIZE?! Just stopping by to say hello!” I also noticed some spices jumping about my tongue, making just enough of an appearance for the holiday season.

The taste of Infinium was perfectly complemented by its texture and mouthfeel. While it was quite carbonated, the ale left an exceedingly clean feeling on the tongue. I guess the muthafuggahs weren’t messing around when they described the concoction as a champagne analogue! In terms of body, Infinium hit the middle of the road – it wasn’t a chore to drink, but I certainly wouldn’t suggest funneling it. Additionally, the ale totally warmed my mouth and throat, encouraging me not to forget about the elevated ABV.

Infinium is proof that we don’t have ignore yesteryear or fear the future. Instead, those who have come before can work in tandem with those hoping to come after. Germany’s Weihenstephan beer Miyagi has taken America’s Sam Adams Daniel under its wing. And the end result is a crane-kick throwin’ bad ass.

What I’ve experienced tonight is a well-balanced, delectable brew that seems capable of pleasing beer enthusiasts of both the sweet-tooth and bitter-bug variety. It’s $20 a bottle and of limited availability. In other words, it’s a beer you need to find and share with your ka-tet.